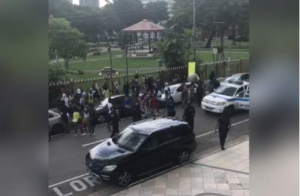 (CMC) – The Trinidad and Tobago Police Service (TTPS) today said they foiled a “well-orchestrated plan to destabilise the country” and have arrested 72 people as protesters blocked roads and fired gunshots demanding that the officers involved in the deaths of three men last weekend by police be brought to justice.

The police confirmed that one person has died as a result of the protest and said that “investigations are underway to determine the cause of her death”.

Media reports identified the woman as Ornella Greaves, 30, who died while being treated at the Port of Spain General Hospital for gunshot wounds. There were also unconfirmed reports that a man also died as a result of the protest.

The police said that so far, 72 persons have been arrested, and others are expected to be charged when investigations are completed.

“Intelligence has revealed that this was an orchestrated plan that was led by several gang members, whereby the intention was to use the shooting of the three young men a few days ago as a front to cover the planned plot to shut down the country,” the police said.

Police Commissioner Gary Griffith reminded the public that he had stated that any police officer charged for a violent crime should be removed from the service, “as we are expected to be at a higher standard”.

“However, it is unacceptable that some, in their desire for justice, can expect any law-abiding citizen to justify this demand by condoning others to break the law, as was done today.

“This was a well-orchestrated plot by certain gang leaders in the hope to get national support, when they commenced their plan to cause mayhem, fear, and destruction throughout the country. This was wishful thinking, as it has only exposed who the real enemy is, when the nation saw it for themselves, via the plan to destabilise the country, and put law-abiding citizens in harm’s way,” the TTPS said in the statement.

It said that based on prior intelligence, mere hours before these criminal elements commenced their act, the TTPS was prepared.

“The plan to shut down the country involved setting fire to certain places, from along the Beetham to Port of Spain, and when police officers arrived they would be fired upon. The plan was to kill police officers and to shoot up police stations. These same criminal elements used the opportunity yesterday and again this morning to rob law-abiding citizens.”