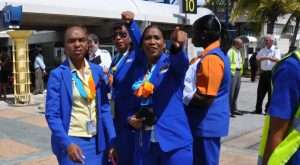 (CMC) – The Antigua-based financially strapped regional airline, LIAT, owes its staff an estimated EC$94 million (One EC dollar=US$0.37 cents) in severance and holiday payment, which it is unable to pay, St. Vincent and the Grenadines Prime Minister Dr. Ralph Gonsalves has said.

Gonsalves told radio listeners in Kingstown that during Saturday’s meeting, the shareholder governments — Antigua and Barbuda, Barbados, Dominica, Grenada and St. Vincent and the Grenadines — decided to liquidate the airline, which has had on-going financial woes.

He said that he received a report from the board of directors and the management on the critical financial position of the airline.

“I got a recommendation from the board of directors, particularly on the issue concerning winding up or liquidation and taking the decision for a general meeting of all the ordinary shareholders of the company to consider a resolution for the winding up, dissolution of the company,” Gonsalves said.

He said LIAT was having problems since 2017, but the hurricanes that year put the airline “in a tailspin and into 2018.

“Remember we lost millions of dollars because you couldn’t go to several countries…. so the schedule was gravely disrupted. We lost a lot of money,” Gonsalves said, adding that 2017 and 2018 were “very bad years for the airline.

Gonsalves said that the management sent their salaries for May, June, July and overdue payroll liabilities.

“Because even though they laid off about 500 workers, they kept on a staff of about 168 across the network. Then, for maintenance of the aircraft, insurance, repatriation of staff and health insurance coverage and rental of office equipment, utilities, that number comes up to about EC$10.8 million. And then you have about –their paid booking at May 2020, LIAT had paid bookings of US$4.3 million outstanding.

“Now, these are things which the liquidator would have to deal with. But severance payment in total, for all the workers, as per the existing collective agreements, which is not necessarily what the law of Antigua would specify but I am taking the law of Antigua in relation to insolvency, the number may be smaller, but if you are dealing with just the existing collective agreements, you’re looking at EC$83.9 million in severance payment and there are people who have vacation pay and for all the countries, it’s another EC$10 million in vacation pay, so you are talking about EC$93.9, call it EC$94 million,” Gonsalves said.

He said LIAT is “insolvent, LIAT doesn’t have any assets to pay anybody anything.

“You see the problem. Now, notice will have to be given to the creditors also so that they can come to the meeting when the meeting is held with the requisite notification. But there are pre-liquidation costs, not dealing with the severance payment because there are some people whose severance is already due, because of the length of time since they have been laid off. They are constructively taken as though they are severed.”

Prime Minister Gonsalves said that the Barbados-based Caribbean Development Bank owns three of the aircraft that LIAT operates and has a priority charge on them.

“And then the rest of the planes are leased and in due course they would have to send them back, unless, of course, a new entity which arises leases them from the lessors,” Gonsalves said.

In February, last year, President of the Barbados-based Caribbean Development Bank (CDB), Warren Smith, said he was “disappointed” with progress towards executing a plan the bank funded to stem losses, improve efficiency and reverse a sharp decline in passengers using LIAT.

The study which was completed in mid-2018 and presented to shareholder governments outlined the airline’s challenges and opportunities and put forward a series of recommendations.

LIAT, which operates 491 weekly flights to 15 destinations from Puerto Rico in the north to Guyana in the south, has suspended its operations until July 15 as a result of the COVID-19 pandemic.