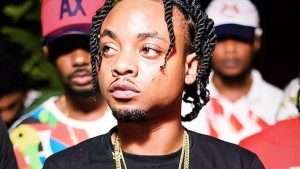 (JAMAICA OBSERVER) – Popular hardcore dancehall artiste Rygin King was up to late yesterday evening in emergency surgery after he was one of three people shot — one fatally by unknown assailants in an incident in Westmoreland yesterday afternoon.

A woman was shot dead and another man shot and injured during that gun attack.

The deceased has been identified as Sashalee Blackwood of an Irwin Meadows, St James, address.

In an earlier incident on the day the police also reported that two women were killed in a shooting incident in Trench Town, St Andrew.

In the incident involving Rygin King, early reports are that shortly after 3:00 pm, the entertainer, whose given name is Mathew Smith, was travelling in a convoy of three motor vehicles along the Struie main road, Bethel Town, in Westmoreland when one of the vehicles was involved in a collision.

The occupants of the three vehicles converged along the roadway as repairs were being effected to the damaged vehicle involved in the accident when a silver motor vehicle drove up.

One man reportedly stepped from the car and started to fire shots wildly at bystanders, an eyewitness said.

After the shooting died down and the assailants sped off, three people were left suffering from gunshot wounds.

They were taken to the Savanna-la-Mar Public General Hospital where Blackwood was pronounced dead and the entertainer and the other man who was travelling with him admitted.

Rygin King, according to a police source, was reportedly shot in the back, chest, and foot.

The other injured man’s condition was not considered life- threatening. He was reportedly shot in the feet.

Rygin King is known for songs such as Tuff, Powerful, One Time, Amazing, Me Myself and I, New Machine, among others.

The parishes of Westmoreland, Hanover, and St James are currently under a state of public emergency.

As news that the artiste was shot spread a large crowd converged on the crime scene.

And in the Corporate Area, the police gave the names of the deceased women in Trench Town as Shanakay Ebanks, and Tamara Phillips. Both were said to have been killed along Fourth Street in the community early Sunday morning.

The police have not made a breakthrough into those killings.