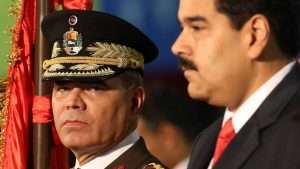 (AFP) — Venezuela accused the United States yesterday of “an act of provocation” after a US warship steamed close to the South American country’s territorial waters the day before.

“A United States Navy destroyer approached within 30 miles of the coast, in a clear act of provocation. It cannot be termed otherwise….it is a clear defiant act,” Defence Minister Vladimir Padrino said during a military ceremony in Venezuela’s northern Carabobo state.

He warned that if the destroyer carried out “military operations” in Venezuelan waters “it will receive a forceful response from our armed forces”.

The minister, a military general, made his comments in a speech to commemorate a decisive battle in Venezuela’s war of independence.

On Tuesday, the US Southern Command said in a statement that a guided-missile destroyer had entered waters that Venezuela considered its own.

“The US Navy Arleigh Burke-class guided missile destroyer USS Nitze (DDG 94) conducted a freedom of navigation operation, contesting an excessive maritime claim by Venezuela,” the US Southern Command (SOUTHCOM) said in a statement.

According to the US Navy, the operation took place in international waters outside a 12 nautical-mile jurisdiction that President Nicolas Maduro claims as belonging to Venezuela.

The vessel sailed in an area that “the illegitimate Maduro regime falsely claims to have control over”, the statement said.

Washington considers Maduro’s presidency illegitimate and has called for his overthrow, recognising opposition leader Juan Guaido as interim president along with around 60 other countries.

US-Venezuela tensions have escalated in recent weeks over the arrival of five Iranian tankers to help alleviate fuel shortages in the South American country.