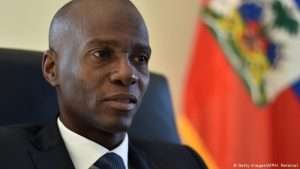 (CMC) — President Jovenel Moïse has pardoned 415 prisoners in a bid to reduce overcrowding at prisons across the country as a senior United Nations official said that the French-speaking Caribbean Community (Caricom) country had experienced an overall increase in gang-related and criminal activity during the first six months of the year.

A Government statement said that Moïse had, acting on the recommendation of Justice Minister Lucmane Délile, exercised his right to pardon and effect commutation of sentence, issued the official order releasing the 415 ordinary prisoners.

“These detainees come from 17 penitentiaries across the country, and their releases contribute to reducing prison overcrowding,” the statement said, noting that the prisoners were also being released due to the novel coronavirus that has killed 80 people and infected more than 5,000 others.

Meanwhile, Helen Meagher La Lime, the special representative of the secretary general of the United Nations, in her report noted that Haiti experienced an overall increase in criminality and gang-related activity in the first months of 2020, even as the protests of 2019, which had increased insecurity, largely abated.

She said while only 30 protests calling for the removal President Moïse from office were recorded in the first quarter of 2020, violence was particularly evident in the context of police protests over labour issues. The protests culminated in clashes on February 23 between a group of some 100, mostly off-duty, protesting police officers and their sympathisers and members of the Haitian armed forces.

Her report, which is presented every 120 days, provides an update on the implementation of the mandate of the United Nations Integrated Office in Haiti (BINUH) and on the activities undertaken by the United Nations to support the Haitian Government in the context of the new coronavirus pandemic.

Regarding the insecurity situation, the report notes that between January 1 and May 31, the number of reported intentional homicides increased by 33 per cent, with 616 cases reported, including 11 police officers and 19 minors.

According to the report, 75 per cent of the cases were recorded in the West Department, where criminality is traditionally more prevalent owing to gangs vying for control over the marginalised neighbourhoods of Port-au-Prince.

Haiti also experienced a 200 per cent increase in reported abductions, with 92 cases — 11 minors and 35 females among the victims — reported to the Haitian National Police during the same period.

“Abductions peaked in February, with 50 reported incidents, prior to decreasing to 25 between March and May. There were 34 reports of sexual and gender-based violence in the first five months of 2020, down from 31 in the five preceding months.”

The report stated that the need for local gangs to generate alternative sources of revenue “reignited inter-gang clashes and led to ongoing reorganisations and shifting alliances”.

It said that the phenomenon was particularly striking in Port-au-Prince (West Department) and in the Artibonite Department, with regular spikes of gang-related incidents reported in Cité Soleil, Croix-des-Bouquets, Martissant, and Village de Dieu over the first two months of 2020, as gangs tried to expand their respective areas of control…

“Amid the public outcry over the increased incidence of abductions, the Haitian National Police launched large-scale police operations, employing improved intelligence and targeting strategies to reverse the kidnapping trend. Arrests of gang members and leaders rose, from 169 in January and February to 232 in March and April, while abductions have declined significantly since March.

“Anti-gang operations continued, even as the police were mobilised to enforce Government measures in the context of the COVID-19 outbreak. Gang violence peaked in the second half of April, however, with a series of inter-gang clashes and confrontations with the police in the Port-au-Prince neighbourhoods of Bicentenaire, Grand Ravine, Martissant, and Village de Dieu as gang members began to oppose police deterrence measures put in place to impede their ability to carry out abductions,” the report added.

It said that the proliferation of illicit weapons and ammunition continues to exacerbate insecurity.

“BINUH and UNDP [United Nations Development Programme] are working closely with national authorities in the framework of a Peacebuilding Fund project and in close cooperation with the United Nations Regional Center for Peace, Disarmament, and Development in Latin America and the Caribbean to develop arms control legislation consistent with international standards.

“In addition, the mission is working with the United Nations Institute for Disarmament Research to conduct a baseline assessment of the life cycle of weapons and ammunition in Haiti. Although those initiatives will require that work in situ, preparations are being conducted remotely,” the report added.