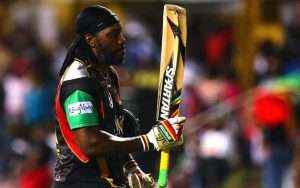 Media reports yesterday said the 40-year-old left-hander, who was down to represent St Lucia Zouks, had pulled out because of “personal reasons”, desiring to spend more time with his young family.

CPL organisers have not formally commented on the development but leading cricket website, ESPN Cricinfo, quoted a spokesman as saying: “We understand that Chris has decided to not take part in CPL for personal reasons. We wish Chris all the best for the rest of 2020 and hope to see him back at CPL in 2021.”

Gayle’s withdrawal will be a big blow for the Zouks, especially with the players draft due to take place today online due to the ongoing novel coronavirus pandemic.

The big-hitting Jamaican was expected to be their trump card, especially with the Castries-based franchise having underperformed since the CPL’s inception seven years ago.

“I don’t have to tell you about Chris Gayle. He is the most successful T20 batsman in the world and I’m happy to be playing with him. I think he will be focused and motivated for the season,” Sammy said.

Gayle is the most successful batsman in the history of the Twenty20 format, with over 13,000 runs and 22 hundreds.

He struck a hundred for his native Jamaica Tallawahs against St Kitts and Nevis Patriots during last year’s CPL, but his form declined significantly and he ended the season with only 243 runs at an average of only 24.

His move to Zouks earlier this year was not without controversy, however. In an incendiary YouTube rant, Gayle accused Tallawahs of “playing games” with him and also launched a scathing attack on Tallawahs coach, Ramnaresh Sarwan, accusing the former West Indies captain of “vindictiveness”.

However, Gayle escaped sanction over the incident, maintaining in a statement that: “In so far as my resentment at the treatment, I stand by my comments in those videos. My words were spoken from the heart.”

Gayle in the past has also represented Patriots.

The CPL is scheduled to be played from August 18 to September 10 in Trinidad and Tobago due to the outbreak of the novel coronavirus pandemic.