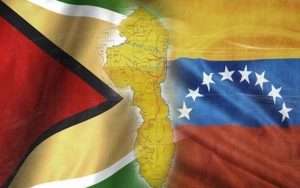 (CMC) — Venezuela Monday renewed its position that the International Court of Justice (ICJ) does not have the jurisdiction to hear the border dispute with Guyana and urged Georgetown to renew negotiations between themselves on the matter.

The date set aside for the start of public hearings into whether the ICJ has jurisdiction to hear the case is June 30.

“[Venezuela] sincerely invites the sister Republic Cooperative of Guyana to renew the negotiation to which both nations are bound by virtue of the Geneva agreement…with the purpose of reaching amicably an acceptable and satisfactory practical arrangement for both republics,” Caracas said in a statement.

The hearing was originally scheduled for March 23-27 and would have determined whether the court has jurisdiction over the case, filed by Guyana on March 29, 2018, to obtain a final and binding judgment that the 1899 Arbitral Award, which established the location of the land boundary between then-British Guiana and Venezuela, remains valid and binding, and that Guyana’s Essequibo region belongs to Guyana, and not Venezuela.

Guyana brought its case to the court following the decision by the Secretary-General of the United Nations, in January 2018, that the world court should decide the controversy between Guyana and Venezuela.

In taking his decision, the Secretary-General was exercising the power, vested in him, in the 1966 Geneva Agreement between Guyana, Venezuela and the United Kingdom, to decide how the controversy should be settled.

Venezuela lays claim to more than two-thirds of Guyana’s landmass including this country’s exclusive economic zone where more than eight billion barrels of oil deposits have been discovered.

The matter was settled in an 1899 tribunal, which Venezuela agreed and signed on to, but in 2015 Venezuela’s President Nicolas Maduro renewed the claim at the height of political instability and deplorable economic conditions.

Guyana moved to the ICJ in 2018 after negotiations proved futile.