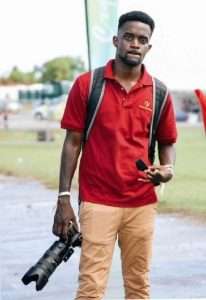 (TRINIDAD EXPRESS) – The Barbados Nation newspaper was plunged into shock and mourning yesterday with the killing of its photo journalist, 25-year-old Christoff Griffith.

The Nation newspaper is part of the One Caribbean Media (OCM) group, which includes the Trinidad Express and CCNTV6.

Griffith was one of two men brutally slain while in the line of duty.

Griffith was responding to a report of a body found in Bishop’s Court, St Michael.

Police reported the other body to be that of Glenroy James, of Grazettes, St Michael, who was contracted by the Anglican Diocese to carry out excavation work in the area.

Police public relations officer, Insp Rodney Inniss, said they received the report around 11 a.m. from other contracted workers who had previously come across James’s body.

“We received a report from workers from A&B Maintenance, who were in the area doing some planned excavation. They reported they had come across a body. Upon investigating, the officers confirmed this but also came across a second body,” he said.

Griffith was attacked and killed after going on the compound.

As news spread, many members of the journalism fraternity, both former and current, arrived on the scene in support, many with tears in their eyes.

Inniss said there was a person of interest assisting police with their investigation.

Amidst the shock and tears following the untimely death of Griffith yesterday, a number of his colleagues fondly remembered him.

Executive editor Carol Martindale remembered the young photo journalist as someone with a zest for life, one who took pride in his work, especially when he captured a great photograph, and one who was always eager to learn.

“Christoff was never disrespectful, even when he was standing firm on a point. He listened, took guidance, and at the end of it all was still able to flash his trademark smile.

“I actually have never seen Christoff get angry or lose his cool, or even get into a quarrel. He was truly a young man who was not only decent but respected the views shared, even when it was to critique his work,” she said.

“Christoff was a young spark and definitely an asset to the Nation’s newsroom where he worked from 2014. He will surely be missed by colleagues and staff,” she added, noting his strength was in his feature photographs which were usually published in the Easy Magazine.

Associate editor Maria Bradshaw said: “Christoff was a quiet, unassuming and respectful young man who took pride in his photography. He found his niche doing photography in entertainment and features.

“He was a very humble person who preferred to remain in the background most times. He was never one to rush to a scene and that is why his death is so shocking to those of us who knew him. He will definitely be missed.”

Photographer Jameel Springer said: “His joy was just getting out there to cover entertainment – it was his real passion. What stood out for me was that while we were out in the day working, he would be home hibernating, but conversely, when we were all asleep at night, he would be out working. He was a fun-loving, jovial person and, yes, he was a ladies man.”

And photographer Sandy Pitt said: “It is very sad the way he has left us. He was an easygoing young man with a very bright future.”

Former editor-in-chief at the Nation, Roy Morris, said he had seen Christoff grow from “the tiny and timid trainee news photographer at Barbados Today, who was afraid to raise his camera to his face when a policeman in tactical wear shouted at him at a murder scene, to a still tiny but confident photographer, who, if confronted by that same policeman today would not back down — but he would not utter a word of insult or disrespect”.

Meanwhile, the Association of Caribbean Media Workers (ACM) yesterday expressed “shock” at the murder of the two people, including the photographer who was on assignment.

“The ACM condemns this and all other ruthless forms of attacks on journalists and the media throughout the world,” the regional body said in a brief statement, adding: “This incident highlights the vulnerability of media professionals and calls for greater vigilance by all when out in the field. We call for swift action in apprehending the perpetrator responsible,” the organisation said.