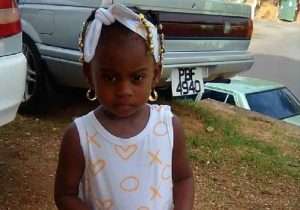 (TRINIDAD EXPRESS) – Two-year-old Aniah McCloud wanted to go with her father Stefon McCloud to get pies on Friday night.

McCloud, 39, with permission from Aniah’s mother, 26-year-old Melinda Jaggernauth, placed his daughter in his white Nissan B15 at about 7.15 p.m. and went to a parlour less than 100 feet from her home at Upper Fairley Street, Tunapuna.

While attempting to turn out of Bamboo Trace and back onto Upper Fairley Street, a silver and black SUV approached the car.

A lone gunman exited the vehicle and fired several shots at the car.

Both McCloud and his daughter were hit several times.

McCloud lost control of the vehicle which then crashed into a white car that was parked along the road.

The gunman returned to the SUV and drove away.

McLoud and Aniah were taken to the Eric Williams Medical Sciences Complex at Mt Hope.

Both died while undergoing treatment.

While they did not have a motive for the killings yesterday, police said they suspected it was gang-related.

They said McCloud was known to them as he had prior matters before the courts, especially for narcotics.

Five spent 9mm shells, along with fragments from what appeared to be one casing, were found at the scene of the shooting.

A team of officers from the Homicide Bureau and the Northern Division, including ASP Douglas, Insp Pitt, Sgt Ammon, PC Marash and WPC Massy visited the scene.

W-Sgt Sylvester has been appointed to continue enquiries.

When the Sunday Express visited the scene of the shooting, residents said they were trying to come to terms with the incident.

“What they kill that child for? Even if you wanted to kill one man…He had a child with him. What you doing killing this child? She is a toddler. She never do anyone anything. She is innocent in all of your folly. This is madness,” said one man.

Aniah’s mother Melinda Jaggernauth, said she blamed herself for her daughter’s death.

She said Aniah was her only child and she was finding it difficult to come to terms with losing her daughter.

She had a message for her daughter’s killer.

“What again it have for me in this life? It have nothing again. She was my everything. That was my little thing. They take my little thing from me. That child is innocent. She never did anybody anything. She eh make she life yet. And that’s what allyuh go do? How allyuh go see God face? She sees God face. But them? She up there with God right now, but where will they end up? I hope they could take it,” Jaggernauth said.

She said her daughter was a smart girl who acted “older than her years” in conversation.

She said she loved to have her hair combed and to dress up.

Aniah did not like toys but loved to be outdoors and played with anything she was given, Jaggernauth recalled.

Her murder was particularly painful because Aniah had turned two only on June 1.

“She eh even get to enjoy her second year,” Jaggernauth said.

She said McCloud was a kind man and a “great father” who checked on his daughter every day.

She said Aniah had a half-sister who was “about 12” and was preparing to write the SEA examinations.

“He was a great father. He learned from his first daughter and he was excellent with Aniah. Outside of that he was a part-time taxi driver and he was good with everybody. Everybody he is friendly with. And outside of work, he does keep to himself, he doh keep to the friend thing self. The boy goes to work and come home. He would check his children, his peeps, maybe get some weed on the block but that was it. He will sit down whole day in his house. He not in anything. It have a set of wicked people out here. Them men is devil,” Jaggernauth said.

The murder toll stood at 216 for the year so far up to last night.