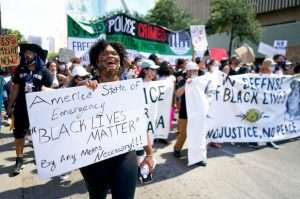 (NEW YORK POST) – A Texas man was busted by the FBI this week for threatening to kill Black Lives Matter protesters in a racist YouTube video, federal officials said.

Manuel Flores, 42, of El Paso, recorded and uploaded a video to YouTube titled “N—-r Lives Matter,” in which he’s only visible from the knees down, with what appears to be an AR-15-style rifle resting on his feet, the FBI and the U.S. Attorney’s Office for the western district of Texas said in a Wednesday statement.

In the video, Flores threatened that he would be traveling on I-20 eastbound through Dallas Monday, while daring Black Lives Matter members to “stop him,” the statement said, citing a federal criminal complaint filed in El Paso.

Flores told viewers that “My dream is [to] at least take out at least 200 n—-rs,” the complaint said.

He also claimed he may have “500 rounds of something,” before adding “Stop me, I’m pissed [and] I’m tired and I’m ready,” The El Paso Times reported, citing the complaint.

The video was posted on a YouTube account titled, “Don’t CA My TX,” according to the paper.

FBI agents tracked Flores Monday to the Dallas area, where he was arrested without incident and charged with one count of transmitting threatening communications, the statement said. He could face up to five years in federal prison, if convicted.

He remains in the custody of the U.S. Marshals Service, awaiting transfer to El Paso, where his preliminary hearing before a federal magistrate has not yet been scheduled.

The FBI is investigating the case and Assistant U.S. Attorney Ian Hanna is prosecuting it on behalf of the government.