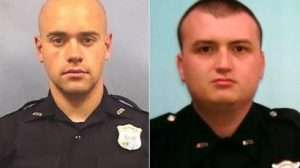 (AFP) —An Atlanta police officer will be charged with murder for shooting a 27-year-old man in the back, justice officials announced yesterday in the latest case to spark anger over police killings of African Americans.

Atlanta District Attorney Paul Howard said police officer Garrett Rolfe had no justification for shooting Rayshard Brooks as Brooks fled, and aggravated the case by kicking Brooks’ body as he lay on the ground bleeding.

He also said that Rolfe and fellow officer Devin Brosnan violated multiple police department regulations after they detained Brooks when he was found sleeping in his car in the drive-up line at a local Wendy’s fast-food restaurant on June 12.

“We concluded that, at the time that Mr Brooks was shot, he did not pose an immediate threat of death or serious physical injury to the officers,” Howard said.

The new killing has ignited fresh anger and protests.

Howard said a warrant was issued for Rolfe’s arrest on 11 counts including felony murder — a homicide committed in the course of another felony crime — aggravated assault, and multiple counts of violating police procedures.

The murder count could bring a sentence of death or life in prison.

Brosnan, who has agreed to become a witness for the state in the investigation, faces three charges including aggravated assault.