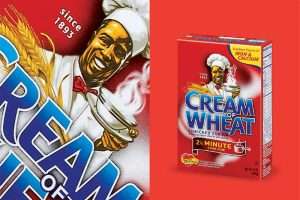 (ROLLING STONE) – Following Wednesday’s announcements that Quaker Oats would discontinue the Aunt Jemima brand and Mars would “evolve” its Uncle Ben image, B&G Foods, the parent company of Cream of Wheat, said it will launch an “immediate review of the Cream of Wheat brand packaging.”

The breakfast food — first manufactured in 1893 — has long been criticized for its use of Rastus, a smiling African-American chef whose name has been shorthand for a derogatory slur against African-American men and whose visage has been criticized for being stereotypically subservient. The character of Rastus has appeared in numerous minstrel shows dating back to the 1800s. Rastus was removed from the packaging in 1925, but the company replaced it with a similar image that remains today. Calls to remove the character altogether have grown louder as brands have reconsidered their packaging and marketing in recent weeks.

“B&G Foods, Inc. today announced that we are initiating an immediate review of the Cream of Wheat brand packaging. We understand there are concerns regarding the chef image, and we are committed to evaluating our packaging and will proactively take steps to ensure that we and our brands do not inadvertently contribute to systemic racism,” a rep for B&G said in a statement to Rolling Stone. “B&G Foods unequivocally stands against prejudice and injustice of any kind.”

In a statement Wednesday, Quaker Oats — who purchased the Aunt Jemima brand of syrup and pancake mixes in 1926 — admitted the racial history of the brand, which was named after the minstrel song “Old Aunt Jemima” and has drawn controversy for its racial insensitivity and stereotyping.

“We recognize Aunt Jemima’s origins are based on a racial stereotype,” a Quaker Oats rep said in a statement. “As we work to make progress toward racial equality through several initiatives, we also must take a hard look at our portfolio of brands and ensure they reflect our values and meet our consumers’ expectations.”

Quaker Oats also announced a $5 million donation over the next five years in order “to create meaningful, ongoing support and engagement in the Black community.”

Soon after Aunt Jemima’s announcement, Uncle Ben’s Rice — another food brand built off a racial stereotype — also revealed plans to change their image. “As we listen to the voices of consumers, especially in the Black community, and to the voices of our Associates worldwide, we recognize that one way we can do this is by evolving the Uncle Ben’s brand, including its visual brand identity,” the Mars Incorporated-owned rice brand said in a statement.

Conagra Brands, Inc., the purveyors of Mrs. Butterworth’s brand, have also announced a review of its packaging, which it said was originally “intended to evoke the images of a loving grandmother,” in a statement. “We understand that our actions help play an important role in eliminating racial bias and as a result, we have begun a complete brand and packaging review on Mrs. Butterworth’s,” the statement continued. “It’s heartbreaking and unacceptable that racism and racial injustices exist around the world. We will be part of the solution. Let’s work together to progress toward change.”