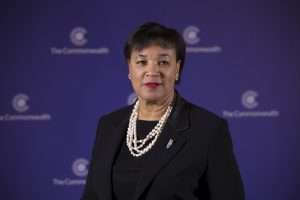 (CMC) — Commonwealth Secretary General, Patricia Scotland, Wednesday warned that the “invisible infection” of corruption could undermine the response of countries to the coronavirus (COVID-19) as well as meeting the sustainable development goals (SDGs) and their long-term development.

Addressing the annual conference of the Commonwealth Caribbean Association of Integrity Commissions and Anti-Corruption Bodies (CCAICACB), Scotland laid criminal acts such as fraud, bribery and theft have a devastating impact, both in financial terms and in human cost.

She told the conference that it is estimated that every year one trillion US dollars is paid in bribes globally, while an estimated US$2.6 trillion is stolen annually through corruption, a sum equivalent to more than five per cent of the global gross domestic product (GDP).

She said illicit financial flows cost developing countries US$1.26 trillion per year, enough money to lift 1.4 billion people out of poverty and keep them there for at least six years. While the United Nations Development Programme estimates, that in developing countries, funds lost to corruption are 10 times the amount dispersed in official development assistance.

The secretary-general said corruption would not only undermine efforts to defeat the COVID-19 pandemic but also deprive vulnerable communities of vital funding for social and economic development.

She said the “corrosive cancer” of corruption is one of the major impediments to achieving the SDGs and called for “swift and decisive action” to improve transparency and accountability, and to build confidence that institutions and systems are corruption-free.

“Our Caribbean region is now confronted with the triple impacts of the global pandemic, climate crisis and a potential economic tsunami because of the lockdown measures necessary to fight coronavirus.

“As we mobilise to adapt to climate change and work to withstand its impacts and those of the natural disasters which bring devastation to our islands, there is this invisible infection of corruption which the world must also continue to fight,” Scotland added.

The secretary-general said the work of the Commonwealth Secretariat is crucial in the battle to curb corruption.

She said the approach attacks criminal financial activities on three fronts – research, capacity-building and networking. This is delivered through regional anti-corruption agency networks and training centres, backed up by closer co-operation and learning. The CCAICACB was created by the Commonwealth Secretariat in 2015.

Barbados Minister of Legal Affairs and Attorney General, Dale Marshall, explained the challenge his country faces in combating the dual threat of corruption and the pandemic.

“Barbados has had to divert all of its available resources to keeping our economy afloat. At a time when we are almost in a position to establish an integrity in public life commission, when we are just about to establish a special agency to fight corruption, the resources that we would have made available are now having to be diverted to ensuring that we have ventilators, that those people who have been thrown on the unemployment line have food.

““We are faced with a choice. Do we focus on the issues of keeping Barbados afloat or do we take some of those resources and dedicate them towards the fight against corruption? It is an impossible choice,” Marshall said.

The CCAICACB conference is being held in a virtual format for the first time due to the COVID-19 situation.

The commonwealth said that two further session of the meeting will be held over the next two weeks with members presenting and reviewing their recent anti-corruption initiatives as well as sharing ideas and best practice for use across the region.