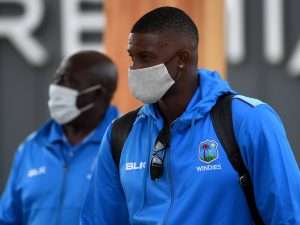 (CMC) — Captain Jason Holder said West Indies were committed to the global fight for racial justice, and will stand in solidarity with the Black Lives Matter (BLM) movement in the upcoming series against England.

The Caribbean side arrived here a week ago for their three-Test series tour which will be played against the backdrop of fervent protests across the world, in the wake of the killing of an unarmed black man, George Floyd, by a white police officer in Minneapolis, United States.

“I must highlight that we Cricket West Indies is firmly behind the movement of Black Lives Matter,” Holder told Good Morning Britain hosted by Piers Morgan and Suzanna Reid here Monday.

“There’s obviously a lot going around the world now with the protests and the whole movement as such and definitely the West Indies team will show their solidarity [with] the movement.

“We as a team have had a few discussions around it and as to what exactly we’re going to do, and I think come July 8 and the first Test match we will show our support around the world towards our solidarity with the movement.”

Global sporting icons such as Formula One driver Lewis Hamilton and heavyweight boxing champion Anthony Joshua have already thrown their weight behind the Black Lives Matter movement, during the current protests.

The English Premier League announced recently players would wear “Black Lives Matter” printed on the back of their shirts for the first 12 matches of the season which resumes next weekend following a break due to the COVID-19 pandemic.

Holder, 28, who has led West Indies in 32 of his 40 Tests, said he believed the current environment provided the ideal climate for changes to take place in race relations but stressed that unity was critical in the process.

“I think the most effective response is always unity. I’ve been following it quite closely and I’ve seen many opinions from people around the world and I think it is a perfect opportunity to inflict change,” said Holder, the Test cricket’s leading all-rounder.”

The Windies tour is also going ahead against the backdrop of the deadly COVID-19 pandemic which has already resulted in 297 000 infections and over 41, 000 deaths