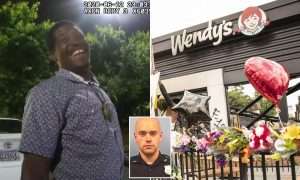 (NEW YORK POST) –  The Wendy’s employee who called police on Rayshard Brooks before his fatal shooting in Atlanta told dispatchers Brooks was asleep and appeared intoxicated — but he was not armed, the 911 call shows.

“I think he’s intoxicated. He’s in the middle of my drive-thru,” the unidentified caller calmly told a dispatcher last Friday night of the 27-year-old father of four.

“I tried to wake him up but he’s parked dead in the middle of the drive-thru, so I don’t know what’s wrong with him,” said the staffer at the restaurant later torched by protesters.

The employee made it clear that Brooks’ behavior was just an annoyance because he left “cars going around him” to use the drive-thru, the 911 call released Monday by Atlanta police shows.

“He woke up, looked at me and I was like, ‘You gotta move out the drive-thru,’” she told the dispatcher.

Asked if he appeared to have any weapons, the employee insisted, “No, no, I think he’s intoxicated.”

Responding officers initially had a friendly chat with Brooks, who admitted drinking to celebrate his daughter’s birthday — only turning violent when he fought to escape being handcuffed, bodycam shows.

He grabbed a cop’s Taser and was shot twice in the back as he tried to run away, an autopsy report showed.

The officer who fired the fatal shots — seven-year veteran Garrett Rolfe — was fired within 24 hours and is being eyed for possible murder charges, Atlanta’s district attorney has revealed.

A stray police bullet also hit a car with children inside, a lawyer for the slain man’s family said Monday.