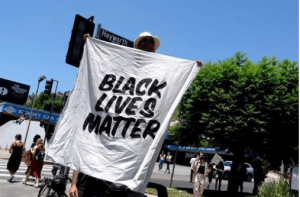 (AFP)— African countries are pushing for the UN’s top rights body to launch a high-level investigation into “systemic racism” and police violence in the United States and beyond, according to a draft resolution introduced Tuesday.

The text was the subject of heated discussions in Geneva ahead of a so-called “urgent debate” on the topic at the United Nations Human Rights Council on Wednesday.

The debate was called for following unrest in the United States and elsewhere over George Floyd’s death in police custody.

The draft resolution, introduced by the African group, condemns “racial discriminatory and violent practices perpetrated by law enforcement agencies against Africans and people of African descent and structural racism endemic to the criminal justice system, in the United States of America and other parts of the world.”

The text calls for the establishment of an independent international commission of inquiry (COI) — one of the UN’s highest-level probes, generally reserved for major crises like the Syrian conflict.

The commission, the text said, should probe “systemic racism, alleged violations of international human rights law and abuses against Africans and of people of African descent in the United States” and elsewhere by law enforcement agencies.

The aim, it said, should be “bringing perpetrators to justice”.

The investigators should also probe “government responses to peaceful protests, including the alleged use of excessive force against protesters, bystanders and journalists,” it said.

A senior US diplomat in Geneva voiced outrage at the draft resolution.

“Our transparency, commitment to a free press, and insistence on the right to justice allow the world to see our problems and openly engage on our efforts at finding solutions,” said the diplomat.

“It is countries that hide the truth, violently silence their critics, don’t have democratic accountability, and refuse even to recognise fundamental freedoms that merit censure.”

Another senior US official, speaking to AFP in Washington, said the United States would take a “hard look” at whether to cooperate on a COI.

“I think it’s a ridiculous idea,” he said of the COI, saying the United States would want to “impose some ground rules” if it is approved.

The draft resolution urges the US government, as well as other relevant countries, to “cooperate fully” with the COI, which would present its findings to the council in a year’s time.

The rights council’s 47 members are due to vote on the resolution following the urgent debate, which is set to begin Wednesday and conclude Thursday morning.

George Floyd’s brother is expected to address the council by video link.

Floyd, a 46-year-old black man who died in Minneapolis on May 25 after a white police officer, who has since been charged with murder, pressed his knee on his neck for nearly nine minutes.

While his death, which was caught on video, has sparked global outrage, it remains unclear which way Thursday’s vote will go.

The United States itself withdrew from the council two years ago, but observers of the process said some of its allies were strongly opposed to the text.

A Western diplomat said a number of countries felt the resolution was “being pushed through to advance a political agenda.”

Rights groups urged the council to take a stand.

“Systemic racism and police violence in the US have reached a tipping-point,” said John Fisher, head of Human Rights Watch’s Geneva office.

Jamil Dakwar, head of the American Civil Liberties Union’s human rights programme, agreed, warning that voting against a COI after “centuries of structural racism” in the United States would be a “missed historical opportunity”.

“No country, no matter how powerful, should be above such scrutiny.”

Wednesday will mark only the fifth time in the council’s 14-year history that it has agreed to hold an “urgent debate”, which is like a special session, but within a regular session of the council.

The debate was requested in a letter last week from Burkina Faso’s ambassador to the UN on behalf of Africa’s 54 countries, and was accepted Monday when the council resumed its 43rd session, which had been interrupted in March due to the coronavirus crisis.