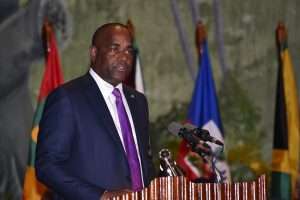 (CMC) — Dominica’s Prime Minister Roosevelt Skerrit is calling for universal access to any vaccine developed to treat the coronavirus (COVID-19) that has killed 432,000 people and infected eight million others worldwide since it was first detected in China last December.

Caribbean Community (CARICOM) countries have reported hundreds of cases of the virus and more than 100 deaths since the first case was reported in the region in March. The French-speaking CARICOM country of Haiti, leads the region in the number of cases, surpassing 4,200, while Jamaica has just over 600 cases. Dominica has no active cases after reporting 18 previously.

Skerrit said that while he does not blame developed countries for ensuring that their citizens are given priority for any vaccine developed to treat the virus, he was nonetheless making an appeal for universal access so as to help prevent the spread of the virus in the Caribbean and other developing countries.

“Scientists are working on vaccines, they are now testing these vaccines within the lab systems. But we know the reality of this that countries like us in the Caribbean, Latin America and Africa will be the last to get these vaccines.

“We saw what happened with the bigger countries in the early stages of the pandemic, the way they went about hoarding supplies. They were holding them for themselves (and) I will not criticise them for that because their first interest is their citizens and so they did what they had to do to protect and provide for their citizens.”

But Skerrit said while the world awaits the vaccines, whenever they are ready it will take the region some time to acquire them.

“This is why we are advocating as a country and as developing countries for universal access to the vaccines to ensure that the institutions like the World Health Organization (WHO), the Pan American Health Organization (PAHO) and the UN can advocate and ensure that countries like ours have immediate access to the vaccines when they are developed,” Skerrit added.