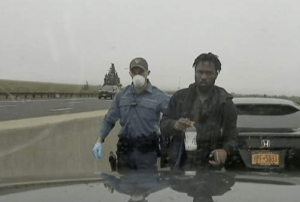 (AP) — A New York man fatally shot by a New Jersey state trooper last month during a traffic stop was treated worse than a dog, and the officer should be charged with murder, the man’s mother said Thursday in an interview.

Racquel Barrett is the mother of 28-year-old Maurice Gordon, a Jamaica native and chemistry student living in Poughkeepsie, New York, who was killed May 23 after a struggle erupted between him and Sgt Randall Wetzel. Wetzel used pepper spray and fired his handgun six times, according to the attorney general’s office.

The encounter is under criminal investigation already and must by law be presented to a grand jury.
Gordon, a student at Dutchess Community College, was black, and Wetzel, who is on administrative leave due to the shooting, is white.

At times fighting through emotion, Barrett spoke to The Associated Press during a video interview from the office of her attorney in White Plains, New York.

“The police officer needs to be charged for his murder. Six shots — that is too much. I mean for a dog you wouldn’t do that, right?” Barrett said. “He’s a human being.”

She described her son as a hard-working Christian who loved his life in America, where he moved when he was 19. She said she still finds herself texting him. Barrett travelled to the United States from London, where she lives, after her son was killed and has stayed in a hotel.

“I’m angry, emotional, broken inside. I haven’t come to terms with the whole situation. I’m still sending him text messages: ‘I’m here, I’m waiting for you.’ I just think he’s still here. I’m always on the phone looking at his pictures,” she said. “I brought some pictures from the United Kingdom with me and I’ve slept with them.

William O Wagstaff III, Barrett’s attorney, said Gordon would be alive if he were white.

The footage included about a dozen audio and video files, though Wagstaff says roughly 12 minutes’ worth of footage was not released initially by the attorney general. The attorney general’s office later on Thursday released the video, which shows what happened after the shooting. It includes the trooper and others discussing taking the trooper to the hospital since pepper spray blew back onto him.

The release of the footage comes amid global demonstrations against police brutality toward black people, stemming from the killing of George Floyd in Minneapolis, who died when a white officer held his knee on Floyd’s neck for several minutes, even after he stopped responding.

Barrett said she was also grieving Floyd’s death, though she saw her son’s and Floyd’s deaths as “two separate cases”.

“The protest is good, especially for people of colour,” she said. “I’m happy it’s going on at the moment because the world needs to see what it’s about.” She added: “We need to be respected for what we are.”

The interaction unfolded about 6:30 am when Wetzel stopped Gordon for going 110 miles per hour on the Garden State Parkway in Bass River, New Jersey. Wetzel is not heard placing Gordon under arrest during the video.

The footage leading up to the shooting shows Gordon sitting in the back of the trooper’s car, where the men discuss a tow truck for Gordon’s vehicle, which failed to start during the stop.

The fatal interaction can be heard through a microphone but occurs outside the vehicle and mostly out of the camera’s range. There are sounds of a struggle before the pop of the shots. Wetzel can be heard telling another official who arrives after the shooting that Gordon tried to grab his gun. Wetzel placed handcuffs on Gordon after he was shot.

A message was left at a cellphone listed for Wetzel, as well as with the labour union that represents state police sergeants.

The attorney general has not given a timeline for how long the investigation would take.