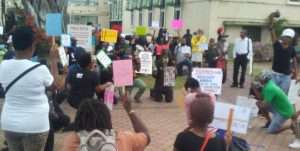 (CMC)— Scores of St Lucians gathered at the Constitution Park in Castries, the capital of St Lucia, on Friday demanding accountability for killings by police officers, as they participated in a “Black Lives Matter” (BLM) rally, deemed illegal by law enforcement authorities.

But the event, which was being held as part of the worldwide criticism of the death of the 46-year-old African- American, George Floyd, at the hands of four white police officers in

Among the speakers at the event, which was watched by police, were the parents of Botham Jean, the St Lucian, who was shot and killed by a white female police officer as he sat in his own apartment on September 10, 2018, in Dallas.

His killer, Amber Guyger was sentenced to 10 years in jail.

church and therefore we must stand in solidarity with George Floyd and the several lives lost at the hands of police or white supremacists in the United States,” Allison Jean, the mother of Botham Jean, told the rally.

“We cannot just believe we are here in St Lucia and it can’t touch us.

“It touched us in September 2018 and it can touch many others who have families in the United States, who have children who have to go to school for study and who have business to do in the US,” she said, adding “we must show America and the rest of the world that our lives matter – that black lives matter.”

But she told the rally that her presence at the rally was also to demand accountability for those persons killed by police in St Lucia.

“We have to demand accountability from our police so we can make St Lucia a much safer place,” she said, mentioning by name, Arnold Joseph, the 17-year-old schoolboy who was shot and killed by police on May 22 last year.

The St Lucia National Youth Council (NYC) said that the secondary school student was fatally shot by police officers who responded to a fleeing vehicle considered “suspicious” by law enforcement.

“As stipulated by preliminary reports from the RSLPF (Royal St Lucia Police Force) an additional occupant of the fleeing vehicle was non-fatally injured while another was apprehended without injury.

“To this date, traffic violations are the only charges brought forward by the RSLPF in a case which has been shrouded by inconclusive information,” the NYC said.

Jean told the rally that St Lucians have become too “passive regarding things that matter to us.” Don’t wait until it happens to us personally to get involved,” she said, noting that the present state of emergency which has been in place as part of the efforts to curb the spread of the coronavirus (COVID-19), had become oppressive and restrictive.

Acting Police Commissioner Milton Desir had on Wednesday written to St Lucia’s Goodwill Ambassador, Taj Weekes, informing him that his request for Friday’s BLM rally had been denied in keeping with the COVID-19 restrictions on mass gatherings.

Prime Minister Allen Chastanet had expressed his support for the protest against racism and that the final decision is the responsibility of the relevant authorities.

“From the moment the coronavirus was declared a life-threatening pandemic, we have at all times relied on and followed the guidance of the health and security authorities. Let us all acknowledge that their advice has thus far kept St Lucia safe,” he said in a statement.

Jean told the rally that Desir had no choice, since to approve the rally would have overwritten the emergency regulations.