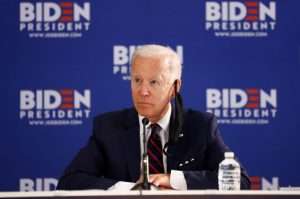 (NEW YORK POST) –  Joe Biden on Thursday suggested that the assassination of Dr. Martin Luther King Jr. in 1968 did not have the same global impact as the recent death of George Floyd at the hands of police.

Speaking at an economic roundtable in Philadelphia, the presumptive Democratic nominee, 77, said cell phones had changed the way people were able to document police brutality much like televisions first introduced Americans to the horror of the 1960s civil rights battle.

“Even Dr. King’s assassination did not have the worldwide impact that George Floyd’s death did,” Biden said.

“It’s changed the way everybody’s looking at this,” he said of cell phones.

“What happened to George Floyd — now you got how many people around the country, millions of cell phones. It’s changed the way everybody’s looking at this,” he continued.  “Look at the millions of people marching around the world.”

“It’s just like television changed the Civil Rights movement for the better when they saw Bull Connor and his dogs ripping the clothes off of elderly black women going to church and firehoses ripping the skin off of young kids,” Biden declared.

The death of Floyd, 46, at the hands of a white police officer in Minnesota who knelt on his neck for nearly nine minutes has sparked mass demonstrations across the US and around the world.

His death has ignited calls for police reform and the removal of Confederate statues and thrust the issue of civil rights to the fore of the 2020 presidential fight, with Biden calling for police reform but disavowing the movement within his own party to defund the police.