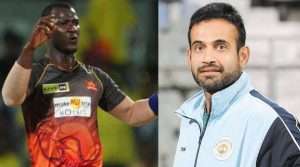 Pathan’s comments come the day after former West Indies captain Darren Sammy asked fellow cricketers in the Indian Premier League to clear the air after learning they may have been mocking the colour of his skin.

“We need to educate our people because I’ve seen them (racial jibes) in domestic cricket,” Pathan said on Wednesday. “Some of our cricketers from the south, especially, have faced that in the northern and western parts of the country.

“What happens is among the crowd, someone tries to act like a jester. It’s not because people are racist, but it’s like someone trying to be popular by saying something seemingly funny that amounts to crossing the line on certain occasions.”

Sammy, who is black, said in a video on Instagram he was frequently called “kalu” by smiling and laughing Sunrisers Hyderabad teammates while playing in the IPL in 2013 and 2014. Kalu is Hindi for black, but Sammy said on Monday he thought it meant “strong stallion,” that it was “uplifting,” and he would gladly tell people that’s his name.

He was enlightened and disgusted after watching Hasan Minhaj, a US comedian of Indian descent, reveal in his Patriot Act show on Netflix that kalu was used in a discriminatory way in India.

Pathan said he wasn’t aware of any such racial jibes at Sammy.

“I was there with him (Sammy) in 2014. I feel had this really happened, the matter would definitely have been discussed, so I’m not aware of such things as nothing was discussed in a larger way,” Pathan was quoted in ThePrint, an Indian digital platform for news reports and analysis.