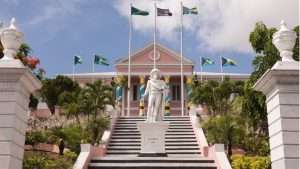 (LOOP NEWS CARIBBEAN) – A petition, which seeks to have the Bahamian Government remove a statue of Christopher Columbus from the front steps of Government House, has reached its goal of 7,500.

The petition was started by Craig Woodside on June 7.

Woodside said the statue, which overlooks the capital city of Nassau, should be removed since Columbus was partly responsible for the deaths of thousands of indigenous people throughout the Caribbean.

One woman, who signed the petition, said: “Christopher Columbus should not be honoured. He was a murderer and annihilated the indigenous Bahamians. He wasn’t even a good navigator as he accidentally stumbled upon the “new world”.”