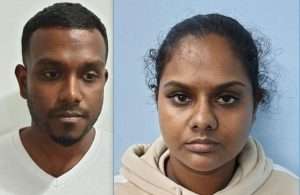 (TRINIDAD EXPRESS) – A Canadian man and a Guyanese woman are expected to appear before a Port of Spain Magistrate on Monday charged with trafficking counterfeit cards and possession of card-making equipment, arising out of several weeks of investigations by officers of the Fraud Squad’s ABM Task Force.

The two were held by officers of the ABM Task Force at an apartment at Pine Place, Mausica.

Police said when they arrived at the apartment, they observed a male suspect leaving the premises in a motor vehicle. The car was intercepted and the man searched, which resulted in four counterfeit cards, along with several ATM receipts, being found hidden in his left shoe.

A search of the apartment resulted in one bulletproof vest, a red dot scope, a quantity of card skimming equipment and a quantity of counterfeit cards being found and seized. A female suspect who lives at the address was also detained in connection with the finds.

Yogonathan and Mohabir were charged with the offences by PC Solozano, of the ABM Task Force.