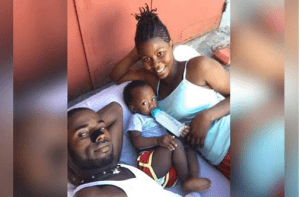 (JAMAICA OBSERVER) – The burnt remains of the three bodies were found at Beach Road, Point Morant, in St Thomas, on Saturday have been identified as that of a female Jamaica Defence Force (JDF) soldier Lexton Clayton, 21; her child, Tyler Taylor, 2; and the child’s father, Kimani Taylor, 28.

Police in St Thomas were, up to press time last night, unable to determine the circumstances that led to the death of the young family.

It was alleged, however, that the two had been having relationship challenges.

The police report that Taylor, a security guard with the Portland Municipal Corporation, on Saturday morning rented a Nissan Latio motor car for two days. The owner of the car indicated that he received a call from Taylor early afternoon the same day advising him that he was in St Thomas and had developed difficulty. The call ended abruptly.

Attempts by the owner to again reach Taylor by phone proved futile. The owner then engaged the vehicle’s electronic tracking system to locate the car, which had been seemingly abandoned here in the Pear Tree River community.

According to the police, a child restraint seat and a piece of rope, which appeared to be new, were found inside the motor vehicle.

The owner of the vehicle advised that these items had not been in the vehicle when it was handed over to Taylor under a two-day rental arrangement.

Reports from the police are that after collecting the rental Taylor, who is from Cornwall Barracks in Portland, picked up his son. It is believed he then collected Clayton from JDF headquarters, Up Park Camp, in Kingston, and the three headed for her home town in Bransbury District, Yallahs, St Thomas.

Investigations are ongoing by the Port Morant police.