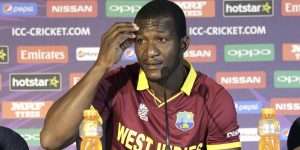 (CMC) — Former West Indies Captain Darren Sammy has urged the International Cricket Council (ICC) and its member cricket boards to speak out against social injustice and racism, amid public outrage in the United States and across the globe over the death of a black man in police custody.

Sammy, stressing that the issue was not an American one, took to Twitter to call on those in the cricketing world to make their voices heard as justice is demanded for 46-year-old George Floyd who died after a white police officer kneeled on his neck for more than eight minutes, on May 25.

The incident, which was captured on video, has sparked protests across the US and triggered many across the world, including leading sportspeople, to join calls for an end to racism.

“Right now if the cricket world not standing against the injustice against people of colour after seeing that last video of that foot down the [neck] of my brother you are also part of the problem,” 36-year-old Sammy said in a series of tweets.

“ICC and all the other boards are you guys not seeing what’s happening to ppl like me? Are you not gonna speak against the social injustice against my kind. This is not only about America. This happens every day. #BlackLivesMatter now is not the time to be silent. I wanna hear u,” the St Lucian all-rounder added.

Sammy, who led the West Indies to a T20 World Cup victory in 2016, encouraged cricketing bodies to show they cared by supporting the #BlackLivesMatter movement.

“For too long black people have suffered. I’m all the way in St Lucia and I’m frustrated. If you see me as a teammate then you see #GeorgeFloyd. Can you be part of the change by showing your support?”

Sammy’s former Windies teammate Chris Gayle, who said he had experienced racism first-hand in his cricketing career, also used his platform to draw attention to the issue.

“I’ve travel(led) the globe and experience(d) racial remarks towards me because I’m Black…Racism is not only in football, it’s in cricket too!” added the 40-year-old who has played cricket for more than two decades.

Cricket West Indies (CWI) also issued a statement on inequality on its website on Tuesday, saying that it “stands together with the millions around the world in the battle against racism and the fight for equality and justice”.

“The people of the West Indies have fought many battles of our own, on and off the field. We have been blessed to witness the prowess, determination and leadership of our cricketing heroes who united the Caribbean and brought great success and pride to our people.

“Our cricketing heroes helped in large measure to pave the way for cricket and our West Indian societies to thrive at home, and generated great enjoyment and dignity for the West Indian Diaspora abroad while they faced their own experiences of inequality and injustice in their adopted homes. We therefore support all sporting icons and role models who are today leading the way in peacefully protesting and standing against the scourge of racism and injustice.

Meantime, the England & Wales Cricket Board (ECB) tweeted a picture of Jos Buttler, Jofra Archer, and Adil Rashid hugging, with the caption: “We stand for diversity. We stand against racism.”

The Barbadian-born Archer was the target of racist comments during the Test series in New Zealand last November and as recently as March this year, the England pace bowler spoke out against racist abuse and called for action against perpetrators.

The ICC has not issued a statement on the Floyd matter. However, several players have been sanctioned under the governing body’s anti-racism policy in the past.