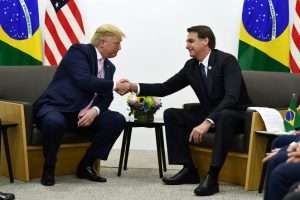 (AFP)— President Jair Bolsonaro threatened Friday to withdraw Brazil from the World Health Organization, following in the footsteps of his US counterpart, Donald Trump, accusing it of “ideological bias.”

“I’m telling you right now, the United States left the WHO, and we’re studying that, in the future. Either the WHO works without ideological bias, or we leave, too,” the far-right leader, a Trump admirer, told journalists outside the presidential palace.