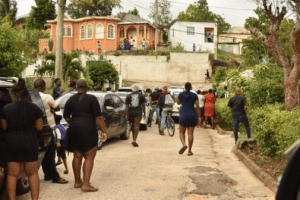 (JAMAICA OBSERVER) – A Manchester man was last night rescued by the police as he was set upon by an angry mob after he allegedly killed the mother of his four children in the community of Heartease on the outskirts of Mandeville.

Deputy Superintendent of police Lloyd Darby told OBSERVER ONLINE this morning that the police rescued the accused about 8:00 pm in the neighbouring community of Grove Mount.

“The suspect is in the hospital. He was mobbed by citizens last night in an adjoining community, Grove Mount. He is now under police guard,” said Darby.

Yesterday, OBSERVER ONLINE reported that shortly after 2:00 pm, 36-year-old Shanalee Bailey was found with multiple stab wounds in her one-bedroom house, which she shared with four of her five children.

Relatives of the deceased told OBSERVER ONLINE that the accused had moved out of the one-bedroom house and had since been living nearby following relationship issues.