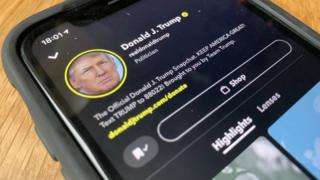 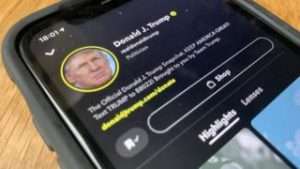 As a result, it will no longer feature in the app’s Discover section. The firm said it would “not amplify voices who incite racial violence and injustice”.

The decision follows Mr Trump saying that “vicious dogs” and “ominous weapons” would have been used on protesters if they had breached the White House fence.

It follows Twitter’s decision to hide some of the president’s posts.

Snapchat’s parent company Snap said: “Racial violence and injustice have no place in our society and we stand together with all who seek peace, love, equality, and justice in America.”

The move is likely to feed into tensions between the White House and social media, which escalated when Twitter added fact-checking tags to some of the President’s tweets last week.

The president subsequently signed an executive order seeking to curb legal protections offered to the industry.

Twitter later hid one of the president’s tweets for breaking its rules on “glorifying violence”.

Its chief executive Mark Zuckerberg has resisted internal and external calls to intervene in regard to posts on its platform. Mr Zuckerberg has said the firm’s free speech principles mean the president’s posts should be left up unaltered.

President Trump has more than one million followers on Snapchat, according to the Bloomberg news agency. It said the app is seen as being a “key battleground” by Mr Trump’s re-election campaign because it offers a way to reach first-time voters.

The president’s account will not be suspended or deleted.

However, the fact it will not feature in Discover means that his posts will only be seen by people who subscribe to or search for his account directly.

Snapchat based its decision on remarks Mr Trump had posted to Twitter rather than its own platform.

On Monday, Snap’s chief executive Evan Speigel had sent a memo to staff in which he detailed his views on the civil unrest sparked by the killing of George Floyd.

“Every minute we are silent in the face of evil and wrongdoing we are acting in support of evildoers,” Mr Speigel wrote.

“As for Snapchat, we simply cannot promote accounts in America that are linked to people who incite racial violence, whether they do so on or off our platform.”

“Our Discover content platform is a curated platform, where we decide what we promote,” he added.