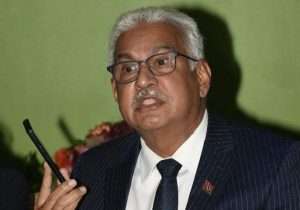 (TRINIDAD GUARDIAN) — As hundreds of citizens request exemptions to re-enter Trinidad and Tobago, Health Minister Terrence Deyalsingh says Government may consider asking people to pay for their COVID-19 quarantine stays.He made the comment during yesterday’s COVID-19 update in response to questions on whether T&T could follow Jamaica’s policy for its returning nationals.

Earlier this month, Jamaica’s Minister of Foreign Affairs and Foreign Trade Kamina Johnson said some nationals would have to pay US$20 per day for the 14 days of their mandatory quarantine.

Deyalsingh said while he did not have a firm decision on the issue, it was something he would discuss with Prime Minister Dr Keith Rowley and Minister of National Security Stuart Young.

“On the issue of paying for quarantine, I think it is something that may have to be considered as the number goes up and up. I see Jamaica is taking that stance. I do not have a firm decision as yet,” Deyalsingh said.

Quarantine has been costly for the state, with a few million already spent on returning nationals. Giving rough estimates, Deyalsingh said the Government paid about $1 million to set up the National Tennis Centre in Tacarigua, which housed some 33 nationals who returned from Barbados. There was a similar cost to set up the quarantine accommodation at the University of the West Indies’ Debe Campus. The university itself spent a few hundred thousand dollars on perimeter work. These figures do not include the cost of food, staff and consumables.

Deyalsingh admitted funding this process was an issue.

“It is a very expensive process to accommodate this and so far the taxpayer has been carrying that burden. I want to thank most sincerely the taxpayer for their generosity at this time,”
he said.

The Government is currently repatriating cruise ship employees from the United States and university students in various Caribbean islands.

Up to yesterday, Royal Caribbean International’s Visions of the Seas remained in Barbados waters awaiting approval from the Government to repatriate 345 nationals. Those nationals will be tested for COVID-19 on arrival in T&T and undergo a 14-day quarantine period aboard the vessel.

Meanwhile, 29 Trini crew members aboard the Carnival Fantasy cruise ship are expected disembark in Port-of-Spain today. A crew member, who did not wish to be identified, said yesterday they were expected to be tested for COVID-19 and taken to a quarantine facility.

Meanwhile, as T&T citizens in the US call for locals to join the #blacklivesmatter protest over the police killing of George Floyd in Minneapolis, Deyalsingh maintained that the Public Health Ordinance only allows for gatherings of five and less.

During the conference, he showed face shields made of plastic and fabric, done locally, that cost approximately $30 to make. He recommended these for people with asthma, bronchitis and Chronic Obstructive Pulmonary Disease (COPD) and other diseases that make wearing normal face masks difficult.