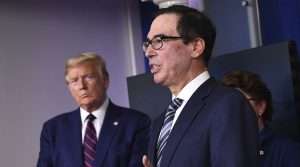 The US Treasury hit four companies, saying it was “unacceptable” that they continued to ship crude “for the benefit of the illegitimate regime of President Nicolas Maduro”.

“The United States will continue to target those who support this corrupt regime and contribute to the suffering of the Venezuelan people,” Treasury Secretary Steven Mnuchin said in a statement.

The move was the latest in a long series US sanctions that have targeted Venezuelan officials and oil exports, putting pressure on Maduro and starving Caracas of vital income.

The country is almost entirely dependent on oil exports for revenues but production has fallen to roughly a quarter of its 2008 level as Venezuela enters its sixth year in recession.

Maduro’s government blames the loss in production on US sanctions, including those levied against the state oil company PDVSA, but many analysts say the regime has failed to invest in or maintain infrastructure.

Last week the first of five Iranian tankers carrying much-needed gasoline and oil derivatives docked in Venezuela, a sign of the closer relationship between the two countries seen as international pariahs.

The four companies sanctioned Tuesday — three registered in the Marshall Islands and on in Greece — will have any US assets embargoed and will be blocked from the American financial system.