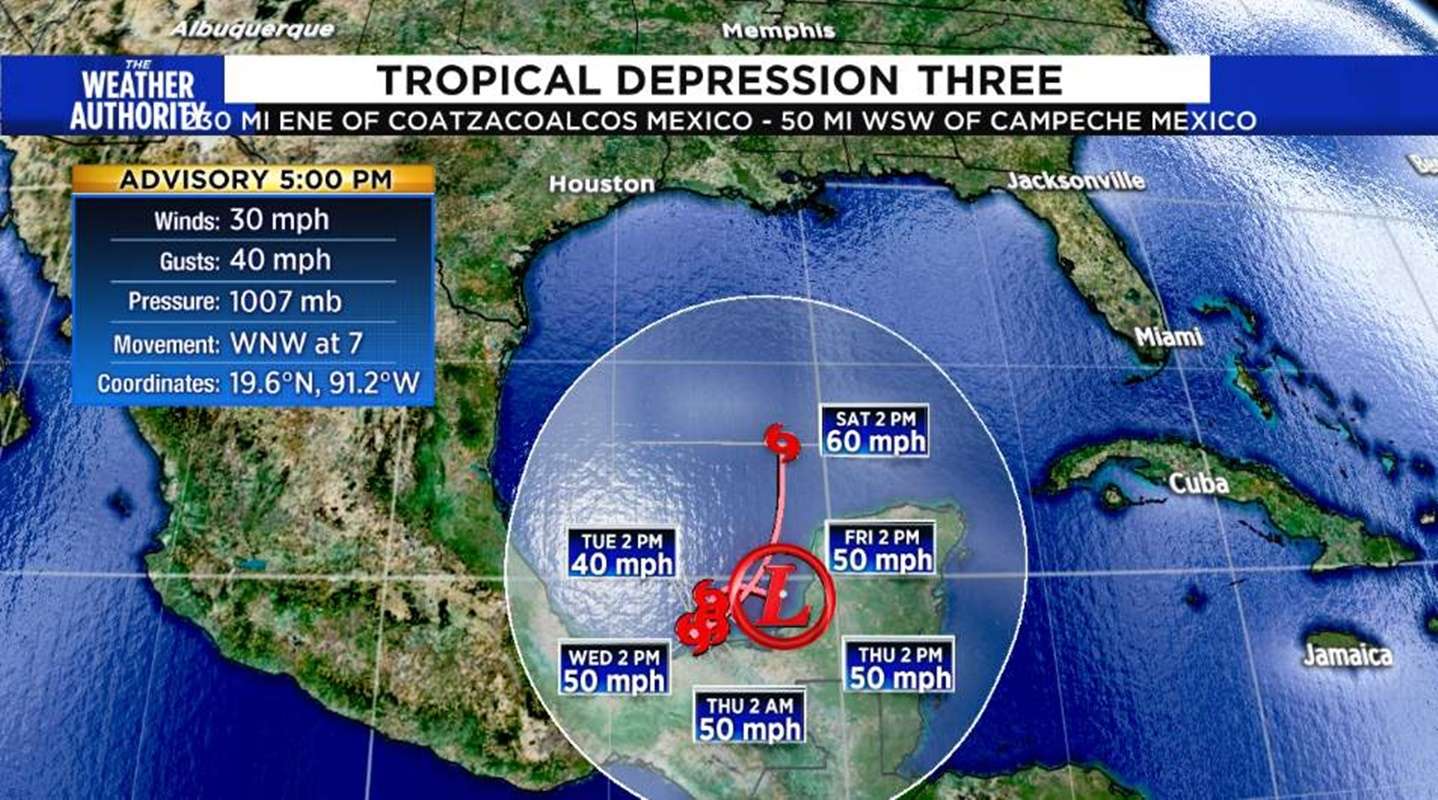 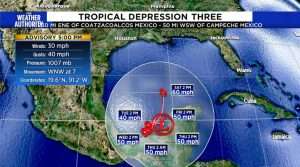 (NEWS4JAX) – Tropical Depression 3 forms in the Gulf, just off the coastline of Mexico.

Today marks the beginning of hurricane season and it’s already been an unusual one, with two storms forming prior to the start of the season. Tropical Storm Arthur formed on May 12 and Bertha formed on May 25. The unusual theme continues — a tropical storm that formed in the Pacific, Amanda, has broken down while crossing Mexico but then reformed as Tropical Depression 3.

The Pacific name for the storm, Amanda, was not be used, and if it develops into a storm we would name it the next name on the Atlantic list, Cristobal. This is because Amanda weakened below tropical depression status as the system crossed Mexico.

Prior to the year 2000, regardless of degradation storm names would change when they crossed from the Atlantic to the Pacific basin and visa versa. In the year 2000, the hurricane committee decided that storms that maintained strength while crossing basins, they would not be renamed, they would keep their original name. Because Amanda broke down and will likely reform, the new system will get a new name, from the Atlantic list.

At 4 p.m, the center of Tropical Depression Three was located near latitude 19.6 North, longitude 91.2 West. The depression is moving toward the west-northwest near 7 mph. This motion at a slower forward speed is expected tonight. The depression is forecast to turn west-southwestward or southward at a slower forward speed on Tuesday and meander over the southern Bay of Campeche through late Wednesday.

On the forecast track, the center of the cyclone is forecast to be near the coast of the southern Bay of Campeche Tuesday night through Thursday. Maximum sustained winds are near 30 mph with higher gusts. Gradual strengthening is expected during the next couple of days and the depression is forecast to become a tropical storm tonight or Tuesday. The estimated minimum central pressure is 1007 mb.

Today marks the first day of the Atlantic hurricane season, which will run until November 30. Long-term averages for the number of named storms, hurricanes, and major hurricanes are 12, 6, and 3, respectively.

Two tropical storms, Arthur and Bertha, already formed this year in May. The next named storm that develops this season will be Cristobal.

Multiple 2020 hurricane season outlooks have been released and they are trending toward an active year. They’re forecasting an above-average — more than six — hurricanes this season, which begins June 1.

Some are even calling for an “extremely active” season — more than nine hurricanes.

There are over a dozen forecasts published. And even though the official forecast from the National Oceanic and Atmospheric Administration won’t come until May 21, a strong consensus in the forecasts across the industry indicates the US is in for an active season.

“In general, the consensus between seasonal hurricane forecasts this year is greater than it has been the past few years,” says Phil Klotzbach, research scientist in the Department of Atmospheric Science at Colorado State University

This year the average forecast — for all 13 groups that have submitted to Seasonal Hurricane Predictions — is eight hurricanes and 17 named storms.