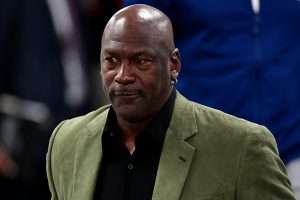 “I am deeply saddened, truly pained and plain angry,” Jordan said Sunday as protests over Floyd’s death on May 25 spawned violence and looting across the US. “I stand with those who are calling out the ingrained racism and violence toward people of colour in our country.

“We have had enough,” added Jordan, who was famously reluctant to comment on social issues during his playing career.

Floyd died after a white policeman in Minneapolis held his knee on the handcuffed man’s neck for several minutes.

“We need to continue peaceful expressions against injustice and demand accountability,” Jordan said.

Jordan joined a chorus of voices from the NBA, National Football League (NFL) and other US sports demanding change for black Americans, but the demands went far beyond America.

World champion driver Lewis Hamilton lashed out at “white-dominated” Formula One for failing to speak out against racism.

Hamilton warned “I know who you are and I see you”, as the Briton accused his fellow drivers of “staying silent in the midst of injustice” following Floyd’s death.

Thuram took a knee after his goal for Borussia Moenchengladbach in a match against Union Berlin, while Sancho marked one of his three goals for Borussia Dortmund against Paderborn by lifting his jersey to reveal a T-shirt bearing the words “Justice for George Floyd”.

Thuram’s gesture echoed the protest against US racism spearheaded by former NFL quarterback Colin Kaepernick, whose decision to kneel during the national anthem at games in 2016 sparked outrage.

NBA Commissioner Adam Silver sent an internal memo to the league’s employees saying it shares “the outrage” at the death of Floyd — which comes in the wake of the police killing in Kentucky of emergency health worker Breonna Taylor in her home, and the fatal shooting of unarmed black jogger Ahmaud Arbery.

“We are being reminded that there are wounds in our country that have never healed,” Silver said in the memo published by Yahoo.

With US pro sports on hold during the coronavirus pandemic, American athletes had no chance to demonstrate on the field of play.

“First and foremost, I’m a black man and I’m a member of this community,” the Georgia native said.