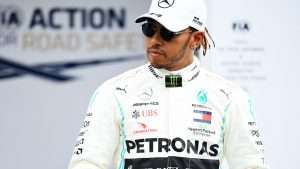 (AFP) — World champion Lewis Hamilton drew a rapid positive response from many of his rivals after accusing the “biggest of stars” in “white-dominated” Formula One of failing to speak out against racism.

The Mercedes driver warned: “I know who you are and I see you”, as he accused his fellow drivers of “staying silent” following the death of George Floyd, an unarmed black man, during his arrest in Minneapolis.

The videotaped incident has triggered unrest in several cities and led to an outpouring of condemnation from figures including Michael Jordan and Serena Williams.

“I see those of you who are staying silent, some of you the biggest of stars yet you stay silent in the midst of injustice,” Hamilton wrote on Instagram.

“I would have thought by now you would see why this happens and say something about it, but you can’t stand alongside us. Just know, I know who you are and I see you.”

Hamilton’s team responded with a statement of support.

“We stand with you, Lewis,” Mercedes posted on Instagram. “Tolerance is an elementary principle of our team.”

Several drivers also reacted, some addressing Hamilton, others finding their voice about Floyd.

“To be completely honest, I felt out of place and uncomfortable sharing my thoughts on social media,” tweeted Charles Leclerc, a 22-year old Monegasque who drives for Ferrari. “And I was completely wrong.”

“We all have a voice to speak up for what’s right – and until now I didn’t know how to use mine in this situation. To echo @charles_leclerc’s words, I just felt out of place sharing my thoughts on these atrocities publicly,” wrote the 22-year-old Briton.

“Truthfully, I have been quite hesitant having a voice around George Floyd’s death. I grew up in a very privileged way, shielded from racism,” the Red Bull driver wrote. “It’s never too late to change and to address what’s wrong. This is about justice and to stand up for racial equality.”

Hamilton’s call for stars to speak out seemed to strike a chord with Lando Norris.

“I have fans and followers,” the 20-year-old Briton who drives for McLaren wrote. “I have power through this to lead and inspire so many, but we also stand for what’s right.”

Nicholas Latifi, a 24-year-old Canadian of Iranian origin who drives for Williams, posted “This has to stop” with a link to a petition and JusticeforGeorge and BlackLivesMatter hashtags.

Two 30-year-old veterans, Australian Daniel Ricciardo and Mexican Sergio Perez, did not refer to Hamilton in their posts.

“What happened to George Floyd and what continues to happen in today’s society is a disgrace,” said the Red Bull driver.

The Racing Point man tweeted a video of a non-violent American sheriff and added the BlackLivesMatter hashtag.