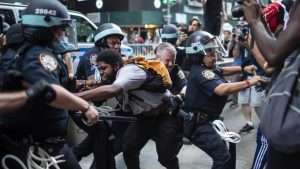 (BBC) — George Floyd’s younger brother, Terrence, has condemned violent protests continuing across the US, stressing that George stood for peace.

“I’m outraged, too. Sometimes I get angry. I want to go crazy. My brother wasn’t about that. You’ll hear a lot of people saying, ‘He was a gentle giant’,” Terrence told ABC News.

He said he would go later on Monday to the site in Minneapolis where his brother was last seen alive to “let people know, just channel your anger elsewhere”.

Terrence said he wanted to see charges of first-degree murder brought against the police officer seen kneeling on his brother’s neck. Other officers who were at the scene should be charged as well, he said.