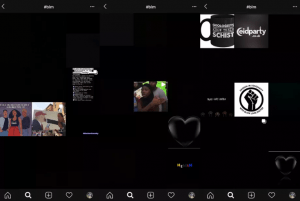 (THE VERGE) – As part of a Blackout Tuesday protest originally organized by workers in the music industry, users on social media, particularly Instagram, are sharing images of black squares in solidarity with black victims of police violence. But many are tagging their posts with the hashtags #BlackLivesMatter and #BLM, obscuring a channel that’s being used to share vital information about protests, organization donations, and document police violence.

The singer Kehlani and rapper Chuck Inglish were among those to call out the problem, retweeting a video of an Instagram feed of black images shared under the #BLM hashtag.

As the video’s original poster noted: “once you click on the blm hashtag you’re directed to an overflow of black images, instead of other more useful content people could look at for information.” Another user said sharing black screens under the hashtags was “counter-productive … Amplify black voices WITHOUT silencing the movement.”

Other social media users urged anyone posting a black screen as part of the protest to simply remove the #BLM and #BlackLivesMatter hashtags from their posts.

“Stop posting black squares under the #BlackLivesMatter hashtag on Instagram,” wrote Twitter user Anthony James Williams. “It is intentionally and unintentionally hiding critical information we are using on the ground and online … Tell me how this helps Black folk. It doesn’t, and it in fact makes things a lot worse. Tell your friends and fam to stop.”

Using the hashtag #TheShowMustBePaused, Thomas and Agyemang called for members of the music industry to “take a beat for an honest reflective, and productive conversation about what actions we need to collectively take to support the black community.”

“The music industry is a multi-billion dollar industry. An industry that has profited predominately from Black Art,” write the pair at TheShowMustBePaused.com. “Our mission is to hold the industry at large, including major corporations + their partners who benefit from the efforts, struggles and success of Black people accountable.”

Many record labels, radio stations, and musicians have since shared posts on social media under the #TheShowMustBePaused hashtag and expressed solidarity with the black community. Some record labels have promised not to release new music this week.

It’s not clear when the social media protests became labeled as Blackout Tuesday or when sharing a black screen became a sign of participation. Thomas and Agyemang stressed in their posts that they weren’t organizing a “24-hour initiative.” Said the pair: “We are and will be in this fight for the long haul.”

Black Lives Matter itself dates back to 2013, as a response to the acquittal of George Zimmerman for the killing of 17-year-old Trayvon Martin. Hashtags associated with the movement are used for a range of purposes, from posts in solidarity to activists sharing information about attending protests to the documentation of police brutality.

As protests have spread across the US in response to the police killing of George Floyd, social media has provided an essential channel for both organizing demonstrations and sharing footage of police violence.