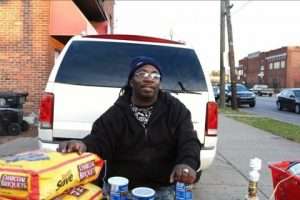 (BET) – David McAtee, the owner of YaYa’s BBQ in western Louisville, was shot and killed by law enforcement officers early Monday morning after police officers and soldiers from the National Guard opened fire on protestors.

According to Louisville Police Chief Steve Conrad, the incident happened around 12:15 a.m. in the parking lot of Dino’s Food Mart, about one block away from McAtee’s restaurant. Conrad says someone shot at the crowd, and then law enforcement returned fire, killing McAtee. The identities of the original gunman and the law enforcement officers who returned fire have not been released.

More than 12 hours later, his body remained at the scene as police continued investigating and protesters showed up.

The incident is now under state and local police investigation. Officers involved in last night’s shooting did not have their body cameras activated, WLKY reports, and Chief Steve Conrad has been relieved of his duties effective immediately.

McAtee’s loss cuts deep for a community already grieving the death of Breonna Taylor, a 25-year-old EMT worker, at the hands of police. McAtee was known as a “community pillar,” said his mother, Odessa Riley, to the Louisville Courier Journal.

“He left a great legend behind. He was a good person. Everybody around him would say that,” she said. “My son didn’t hurt nobody. He didn’t do nothing to nobody.”

In a tragic twist of irony, Riley told The Courier Journal that her son was known to offer law enforcement officers free meals. “He fed them free,” Riley said. “He fed the police and didn’t charge them nothing.”

She continued “My son was a good son. All he did on that barbecue corner is try to make a dollar for himself and his family. And they come along and they killed my son.”