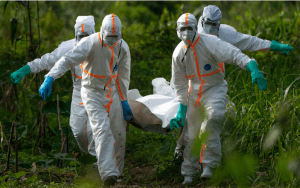 telegraph.co.uk – A second Ebola outbreak has been confirmed in the Democratic Republic of Congo, some 600 miles from an ongoing epidemic that has claimed more than 2,200 lives.

According to the World Health Organization six cases of the highly contagious haemorrhagic fever have been identified and four people have so far died near Mbandaka, the regional capital of Équateur Province.

The outbreak was first announced on local radio by the region’s governor, Bobo Boloko Bolumbu, on Monday morning. He said samples from the cases were sent to the INRB, the country’s national medical research organisation in Kinshasa, for secondary confirmation.

“The laboratory has given us the information that all the deaths analysed since the 18th of May are a consequence of the Ebola virus,” the governor said. “However, for precision, the samples have been sent to the INRB for quality control.

“I ask the population to be calm and to continue to respect hygiene measures. Regularly wash your hands with soap. Don’t, say, greet with your hands. Don’t touch ill or dead people who had a fever or bleeding,” he added.

The Équateur Province is in the north-west of the country, roughly 600 miles from North Kivu and Ituri – regions on the border with Uganda which have been at the epicentre of the second-deadliest Ebola outbreak in history.

Efforts to contain that outbreak, which began in August 2018, have been hampered by a perfect storm of violence and mistrust – North Kivu and Ituri have been witness to conflict for more than two decades.

In April, there was a brief moment where it seemed like the virus had been defeated. However this was shattered when, just three days before the WHO was due to announce the end of the outbreak, a new cluster of cases was identified.

The cases in Équateur are thought to be completely separate and mark the eleventh Ebola outbreak in the country since the disease was first identified in 1976.

Another surge of Ebola cases is a major blow for the DRC, which is also battling to contain Covid-19 and the world’s largest measles outbreak.

Dr Tedros Adhanom Ghebreyesus, director general of the WHO, tweeted that the WHO already has staff in Mbandaka to support the response.

“This outbreak is a reminder that Covid-19 is not the only health threat people face. WHO is continuing to monitor and respond to many health emergencies,” he added.

The highly contagious haemorrhagic fever, named after the Ebola river, is thought to have originated in bats. It is spread via bodily fluids and has a fatality rate of more than 60 per cent.

The Équateur region last saw cases in 2018 but a swift response and the deployment of what was then an experimental vaccine stopped the virus in its tracks.

That outbreak began in the rural area of Bikoro in May, before spreading to Mbandaka, a city of more than a million people, prompting fears it would take hold and run out of control.

But by August – just weeks before cases were first discovered in North Kivu – Équateur’s outbreak was declared over. In total 54 people were infected and 33 died.