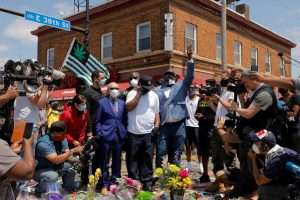 (NEW YORK POST) – George Floyd’s brother paid an emotional visit Monday to the scene where his brother died — as he urged an end to the violence and looting that has erupted amid the police-brutality case.

Floyd’s sibling, Terrence, collapsed in a pal’s arms on his way to a memorial set up at the site in Minneapolis, Minn. — and then forcefully told protesters, “What are you all doing?  You doing nothing! Because that won’t bring my brother back at all.

“It might feel good at the moment, but when you come down … You’re gonna wonder what you did,” Terrence Floyd said.

“Yeah, we understand,” he added, referring to the widespread, now global, protests over the death of his black unarmed brother at the hands of a white cop March 25.

But “let’s do this another way,” Terrence Floyd said.

“Let’s do this peacefully. Please.”

He then led the chant, “Peace on the left, justice on the right!”