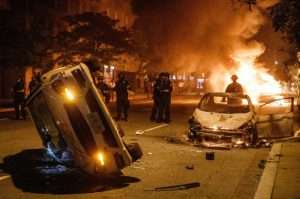 (NEW YORK POST) – The FBI is deploying rescue teams to help local authorities quell violence from George Floyd protests, as federal involvement in the demonstrations begins to grow, according to reports.

Meanwhile, the FBI has set up command posts at local field offices throughout the country, a senior Department of Justice official told CNN.

“In light of civil unrest taking place across the country, ICE personnel and Special Response Teams have been deployed to protect agency facilities and assets in support of the Federal Protective Service and assist local, state and federal law enforcement partners, as needed,” the agency told CNN in a statement.

The announcements come as thousands of demonstrators continue to take to the streets to protests Floyd’s police custody death in Minneapolis.

Dozens of cities have now been hit by protests, with violence and mass arrests in Minneapolis, Los Angeles, Chicago, Atlanta, Miami, and New York, among others. More than two dozen states have activated National Guard troops, and curfews are in place in more than two dozen cities and states.