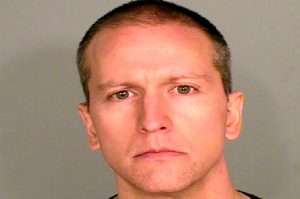 (NEW YORK POST) – Bail for former Minneapolis Police Officer Derek Chauvin, who faces a murder charge in the death of George Floyd, has been set at $500,000, according to the criminal complaint filed in the 4th Judicial District Court of Minnesota.

No conditions have been set for his release, according to the document, nor does it indicate if Chauvin is out on bail. But he could be released on bond if he comes up with $500,000 in collateral.

Chauvin was arrested Friday and charged with third-degree murder and manslaughter, Hennepin County officials said. Chauvin was fired this week, along with three other cops who were at the scene when Chauvin knelt on Floyd’s neck.

The officers were responding to an alleged forgery at a corner store.

Floyd, a 46-year-old black man who was unarmed and handcuffed, said he was unable to breathe as Chauvin kept his knee on his neck for nearly nine minutes. He was declared dead not long after paramedics took him to the hospital.

Chauvin had 18 prior complaints filed against him with the Minneapolis Police Department’s Internal Affairs, according to the police department. His wife has reportedly filed for divorce as a result of the incident.