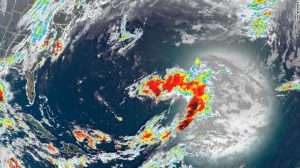 (CNN) – A storm system in the Atlantic could become the third named tropical system of the year — all before the official start of hurricane season.

The National Hurricane Center (NHC) is giving the complex of thunderstorms a 50% chance of becoming a subtropical depression over the next 48 hours.
The system was several hundred miles east-southeast of Bermuda, the NHC said Friday morning.
“If this area of storms over the Atlantic can get better organized over the next 24 to 48 hours, it could be our third tropical system of the Atlantic hurricane season,” CNN meteorologist Haley Brink says.
If the system does become strong enough — sustained winds of 39 mph or higher — it will be named Cristobal.
If this happens, it would be the first time on record that three named storms have formed across this basin prior to June 1, the official start of Atlantic hurricane season, Brink says.
This month we have already had Arthur, which formed May 16, and Bertha, which formed off the East Coast earlier this week.
Since 1900 having two named storms before the official start of hurricane season has only happened five times, said Phil Klotzbach, research scientist in the Department of Atmospheric Science at Colorado State University.
Three of those years have been since 2012, including this year.
Over a dozen forecasting groups, including NOAA, are forecasting this hurricane season to be above average, possibly exceptionally active.
The good news is that even if this storm forms, it doesn’t pose a direct threat to the East Coast at this time.
“This area of disturbed weather still has a ways to go before becoming organized,” Brink says