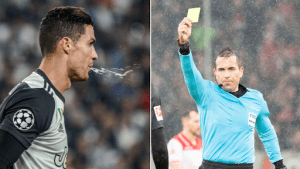 (newsroom.gy) – In an effort to prevent the possible spread of the coronavirus, the Fédération Internationale de Football Association (FIFA) has issued guidelines relative to penalisation of spitting and other related offences during play in response to organisers who “have issued protocols recommending that players refrain from spitting and similar actions such as nose-clearing during matches.”

In a correspondence dated May 27, FIFA advised the following: “Spitting at someone is a sending-off (red-card) offence under the Laws of the Game. However, where spitting does not fall into this category, it would be impractical to make it a yellow-card (YC) offence because it is impossible for the match officials to detect every incident, as spitting can occur anywhere on the pitch, at any time and often away from play (e.g. as players move to take up a position before the next sequence of play). Consequently, treating ‘general’ spitting and other such actions as a YC offence during matches would lead to inconsistency and unfairness.”

As a result, FIFA noted, “where a competition wishes to enforce protocols regarding spitting (and other related areas), any disciplinary decision should be taken by the relevant competition organiser or member association after the match.”