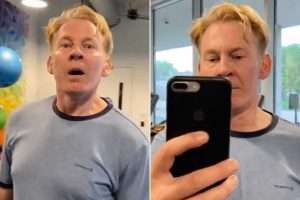 (NEW YORK POST) – A white Minneapolis businessman who was captured in viral video asking a group of black entrepreneurs whether they are tenants in the building told The Post on Thursday that his lease has been “terminated” — and that “yes, I’m no longer CEO of F2.”

Tom Austin, a venture capitalist and managing partner of the F2 Intelligence Group, threatened to call 911 in the confrontation earlier this week.

“I’m a tenant in the building — are you?” he tells the men in the video.

Even after the men told him they were tenants at the Mozaic East building, he called the property manager, the Star Tribune reported.

Top Figure, a social media and branding agency, posted the footage on Instagram and said it displayed racial profiling in action as the men were working out in the building’s gym.

Their company is a member of the WeWork co-working space in the building, which is owned by the Ackerberg Group.

Stuart Ackerberg, CEO of Ackerberg Group, said he was already heartbroken by the video of George Floyd’s death while in police custody when he saw the clip of the confrontation in his own building.

“My heart hurts,” he told the Star Tribune. “This is not how we do business. … I’m alarmed by what I saw.”

He said the WeWork members had used their key fobs to enter the gym on Tuesday night.

“It appears they had every right to be there and to use that amenity,” he said, adding that he spoke to Austin on Wednesday and expressed his alarm.

“I shared with him that I did not think it was handled well and there are other ways to go about this,” he told the paper. “It’s unfortunate. Our goal is to create a safe and inviting experience for everybody.”

In an email to The Post on Wednesday, Austin said he “f—- up.”

“Should have handled it differently. Building management had been complaining that tenants were allowing their friends to trespassing and use a private gym that was authorized only for building tenants,” he said.

Austin accused the men of acting “in a very threatening manner,” so he threatened to call security.

“I would have done this regardless of race. In fact, I told them I’d have done the same thing if they were white, or even a bunch of girls who were trespassing,” he said.

On Thursday, he reiterated his mea culpa.

“Not my job to say anything or question potential trespassers.  I was in a bad mood before I even got to the gym and handled the situation poorly.  Was oblivious to the perception that my actions could be perceived as racist,” he told The Post.

“When I left the gym, at the end of the night I said, ‘Have a great night, hope we’re good.’ And did a fist bump with each of them!  The video demonstrates that I was crabby and stupid, but not racism,” he added.

“I’ve offered to reach out for public apology for stupid behavior (but not for racism), but nobody has responded and most of the public seems to care less.”