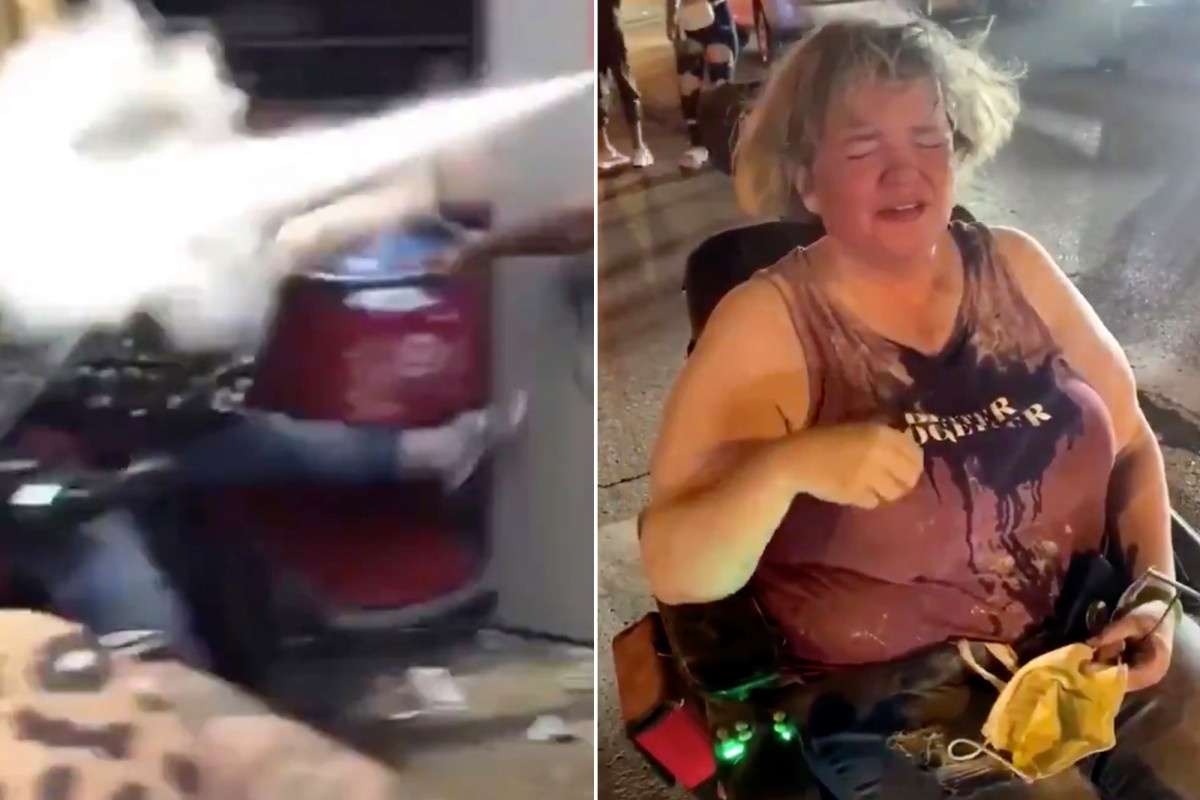 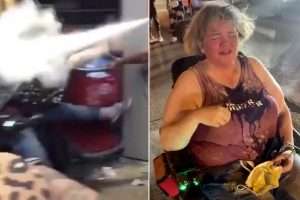 (NEW YORK POST) – Shocking video has emerged of a woman in a motorized wheelchair being punched in the head and sprayed with a fire extinguisher in Minneapolis after reportedly trying to stop looters during the riots in the wake of George Floyd’s death.

Several videos posted on Twitter show the woman being pummeled and sprayed in the face by a mob as she sits in her chair. In one video, someone can be heard saying she was holding a knife during the melee.

“I was peacefully protesting. They attacked me from the front and back,” the woman, identified as Jennifer in the clips, claims in one video.

“They punched me in the mouth, my head … I got punched in the head several times. I got grabbed from behind … They stole my keys. They stole everything they could off of me. I got Maced in the face, I got covered in fire extinguisher.”

The woman — who was wearing a shirt that read, “Better Together” — said she was trying to stop people from looting a Target store when she was set upon by the violent crowd.

However, in another video, someone can be heard saying she had a knife.

“Jennifer, is that enough?” a person shouts at her at one point as she absorbs the barrage.

Another video shows her trying to grab a shopping cart full of items as a woman wearing a mask grabs her around the throat.

Some people in social media viewed the woman as the aggressor and the fire extinguisher attack as an act of self-defense, according to the Daily Mail.

Jennifer later said she was seen by EMTs who told her to go home, but she remained at the chaotic scene and rebuffed a person’s offer to move her chair.

“I’m trying to block traffic so they don’t go down that way,” she tells the person. “I’ve been involved with the cops before. We’re cool.”

She was later seen apparently getting up from her wheelchair and walking on her own.

The videos emerged as violent protests rocked the city over Floyd’s death while in police custody.

The FBI, the Department of Justice and Minnesota state authorities are investigating his death, which led to the firing of all four officers involved in his arrest.

President Trump on Wednesday night said he asked the feds to “expedite” their probe.