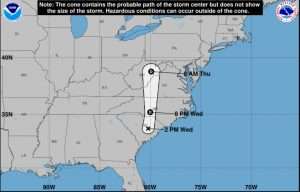 Tropical Storm Bertha has been downgraded to a Tropical Depression.

At 2 pm, the centre of Tropical Depression Bertha was located near latitude 33.7 North, longitude 80.2 West.

According to the US National Hurricane Centre, Bertha is moving toward the north-northwest near 15 mph (24 km/h). This general motion is expected to continue through tonight, followed by a turn to the north along with an increase in forward speed on Thursday.

On the forecast track, Bertha will move across northern South Carolina later today and into central North Carolina by tonight.

There has been a drop in the wind speeds associated with Bertha as well. The maximum sustained winds have decreased to near 35 mph (55 km/h) with higher gusts mainly along the coast to the east of the centre.

Additional weakening is forecast during the next 48 hours, and Bertha is expected to become a remnant low tonight.