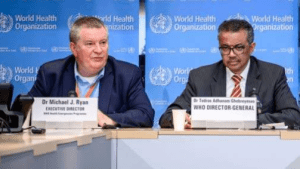 (JAMAICA OBSERVER) – As several countries ease into relaxing the strict measures taken to contain the dreaded novel coronavirus outbreak, top officials of the World Health Organization (WHO) are urging extreme caution, warning that the volatility of the virus could result in a second peak, long before a second wave, causing further devastation.

“We congratulate countries who have managed to contain and suppress the disease transmission; when we speak about a second wave classically what we often mean is that there will be a first wave and the disease by itself effectively goes to a very low level and then it curves a number of months later. What we are concerned about, and that may be a reality for many countries in a number of months’ time, but we need to be also cognisant of the fact that the disease can also jump up at any time. We cannot make assumptions that just because the disease is on the way down now it’s gonna keep going down and then we are going to get a number of months to get ready for a second wave,” the WHO’s emergencies chief Dr Michael Ryan told a press briefing in Geneva, Switzerland, yesterday.

“We may get a second peak in this wave. This happened during pandemics in the past, it certainly happened during the pandemic of 1919. We got a second peak, not necessarily a second wave, and therefore I think right now countries in Europe, countries in North America, many other countries around the world and South East Asia have to continue to put in place the public health and social measures, the surveillance measures, the testing measures and a comprehensive strategy to ensure that we continue on a downward trajectory and that we don’t have an immediate second peak,” he said.

“We will then have to look later down in the year whether or not there is the possibility of a second wave of infections coming and that’s particularly of concern when we look at the possibility of having a second wave of infections that may be also associated with the influenza season which will greatly complicate things for disease control,” Ryan added.

According to van Kerkhove, seroprevalence studies indicate that a large proportion of populations remains susceptible.

“That means that this virus, if it finds an opportunity, will start an outbreak and we need to be very clear on that, remain strong, remain vigilant, have our systems in place to readily detect and care for those cases and find, trace and quarantine contacts. A hallmark of coronavirus is its ability to amplify in certain settings, its ability to cause transmission or super spreading events.

“The good news is we have the steps, the tools to suppress transmission,” she stated.

In the meantime, WHO Head Dr Tedros Adhanom Ghebreyesus said stringency in social and public health measures remain paramount if countries are to overtake the virus and remain in the lead.

“Japan, as you may know, announced the lifting of (its) emergency declaration that was imposed more than six weeks ago. If you see the number of cases it was more than 700 per day, now it’s down to around 14 cases per day and the number of deaths is also kept at minimum, so we can see also the success of Japan; but at the same time they will continue to do the case identification, the proper care, the isolation, and so on. So lifting some of the serious measures doesn’t mean the basics will not be done, it should actually be strengthened,” he advised.

“We remind all countries that are lifting the serious measures they had to make sure that the public health measures, the comprehensive approach is in place and the right instruments can continue to be implemented. If you don’t take serious social measures the speed of the virus will continue to be high. In order to beat the virus you need to be faster than the virus,” the WHO head noted.