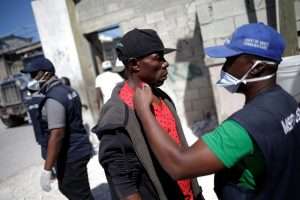 (CMC) — Haiti is moving towards becoming the first Caribbean Community (CARICOM) country to register 1,000 cases of the coronavirus (COVID-19), which has so far killed 344,964 people and infected over five million others worldwide.

The Ministry of Public Health, in its latest bulletin, said that the French-speaking CARICOM country had recorded 93 new cases, bringing the total to 958.

The ministry said that one person had also died, bringing the total number of deaths to 27 since the first case of the virus was detected here on March 19.

It said that men continued to be the main victims of the virus that was first detected in China last December, with 61 per cent of the new cases recorded over the past 24 hours being men.

The ministry of health said that the number of active cases now stands at 909 and that there were 3,115 suspected cases, an increase of 397 over the previous day’s figure.

In addition, 294 people remain hospitalised while 955 remain in home quarantine, an increase of 255 over the previous day’s figures.

Jamaica is the second CARICOM country with a high number of COVID-19 cases. The island has reported 552 cases and nine deaths.

Earlier this month, the director of the Pan American Health Organisation (PAHO), Dr Carrissa Etienne expressed concern at the rate of infection in Haiti, warning of an “impending humanitarian crisis”.

She also highlighted the limited capacity of the Haitian health system, saying “there are few beds for treating COVID-19, insufficient numbers of health professionals and insufficient personal protective equipment”.

The PAHO director noted that most Haitians do not have access to clean water and sanitation, and “many live in overcrowded households where quarantine and isolation are challenging”.