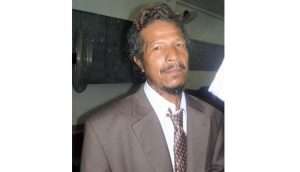 newsroom.gy – A Linden, Region Ten woman is alleging that the callous actions of nurses at the Wismar Hospital Complex led to the death of her 60-year-old father David Stoll known as ‘Rancher’ on Sunday.

The News Room understands that the healthcare workers at the facility ruled him as a suspected COVID-19 case after which the nurses refused to treat him since they complained of not having sufficient protective gears.

However, the results from the COVID-19 test came back negative on Sunday following the man’s death.

Stoll was admitted to the hospital on Wednesday, May 20 where a doctor there was treating him for prolonged fever and lung infection caused by smoking.

His daughter, Isola Stoll Browne told the News Room that on Friday, the doctor was off duty and such requested that the emergency doctor on shift tend to him.

“When the emergency doctor went, I don’t know what transpired with her and the nurse. Suddenly, they declared him a suspected a COVID-19 case which his official doctor did not know about…they isolated him in a ward all by himself, no nurse to take care of him or give him any sort of assistance,” the distraught daughter told the News Room.

Browne said the family was also prevented from visiting but after some insistence on Friday, they were allowed to change his clothes.

“…same clothes we left him in, same clothes we meet he back in. They didn’t change he or anything…the sister said is because they do not have enough gear to suit up and check him every hour.

“…the nurses left him alone in there and he got weaker and I think he even took it on and grieve,” the daughter said.

She recalled that her father suffered a high fever on Friday night but the nurses again refused to tend to him.

The 60-year-old man succumbed at the hospital on Sunday, May 24.

Browne said she is appalled that the nurses did not check on her father at any time to notice his condition since his body was already cold and stiff when they visited.

She said the matter was reported to the Regional Health Authorities.

The News Room contacted the Wismar Hospital Complex and was told by the person in charge that he is unaware of the incident.

He said the hospital, which is being converted into an isolation facility, is not yet prepared to deal with COVID-19 patients and all cases are referred to the Task Force for further instructions.