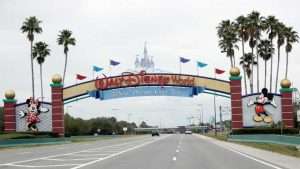 (PERFORM) – The NBA is in preliminary discussions with the Walt Disney Company about resuming the 2019-20 season at an isolated site near Orlando, Florida in late July.

Games would take place at the Wide World of Sports complex, a Disney-owned campus that spans 255 acres and features enough space to accommodate practices and lodging.

NBA spokesperson Mike Bass announced the “exploratory” discussions on Saturday in a statement, noting that the players’ union is also part of the conversations.

“Our priority continues to be the health and safety of all involved,” Bass said. “We are working with public health experts and government officials on a comprehensive set of guidelines to ensure that appropriate medical protocols and protections are in place.”

Disney is the primary owner of ESPN, one of the league’s key broadcast partners.

The NBA has been on indefinite hiatus since March 11, when Utah Jazz center Rudy Gobert became the first major figure in American sports to test positive for COVID-19.

After several months off, many players – including all who went abroad during the hiatus – would need to quarantine for 14 days before rejoining their team-mates for a training camp leading up to the resumption of play.

Players may be recalled to their teams’ training facilities as early as June 1, but the NBA may prefer that they report directly to a central location to reduce travel.

Players who returned to their home countries may also face challenges with local travel restrictions.

The NBA still has not settled on a format for a return to play, such as the NHL’s proposed 24-team playoff bracket.

It has been reported the NBA would like teams to reach a total of 70 regular season games – about five more for most clubs – to fulfill its contracts with local broadcast affiliates.

Others have claimed completing the regular season games and following it with a full 16-team postseason would cause too much congestion, potentially pushing the start of 2020-21 well into December.

The league, like the NHL, has explored the idea of a play-in tournament that would reduce the playoff field to 16 teams without finishing the entire regular-season slate.

The NBA’s board of governors is scheduled to have a conference call next Friday to further discuss a return to play.