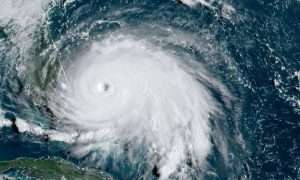 Neil Jacobs, acting administrator of the National Oceanic and Atmospheric Administration (NOAA), said there was a 60 per cent chance the season would be “above normal”, with the possibility of three to six major hurricanes of Category three or higher.

NOAA’s Climate Prediction Center forecast 13 to 19 named storms — those with winds of 39 miles per hour (63 kilometres per hour) or higher.

The NOAA predictions relate to how many storms are expected to form, but do not make any forecasts about landfall.

The Atlantic hurricane season officially extends from June 1 to November 30. There has been one tropical storm already in the Atlantic, Tropical Storm Arthur, the first named storm of the season.

There has been at least one Category five hurricane in the Atlantic Ocean in each of the past four years and an unusually active 2020 season would be the fifth in a row.

Carlos Castillo, the acting deputy administrator of the Federal Emergency Management Agency (FEMA), said the Atlantic hurricane season could be particularly challenging this year because of the novel coronavirus pandemic, and urged people living in coastal regions to be prepared.

But Castillo said FEMA was well equipped to respond to multiple natural disasters at a time and was adjusting its shelter plans, for example, to accommodate social distancing.

“The number of spaces will necessarily be decreased because of social distancing,” the FEMA official said. “If you are in an evacuation zone you should plan to go, maybe, to friends who are outside the evacuation zone.”

“COVID-19 may impact the disaster preparedness plan you had in place,” Castillo added.

“Natural disasters won’t wait, so I encourage you to keep COVID-19 in mind when revising or making your plan for you and your loved ones.”

Hurricane Dorian, which reached Category five strength at one point, was the most destructive storm of last year, causing major damage and dozens of deaths in The Bahamas.

In 2018, hurricanes Florence and Michael killed dozens of people and caused tens of billions of dollars in damage in North Carolina, South Carolina, and Florida.

The previous year, 2017, was particularly devastating, with hurricanes Harvey, Irma and Maria wreaking deadly havoc throughout the Caribbean and Atlantic region.